Just a very quick knitting blog to show the BSJ - Baby Surprise Jacket - made for Edward. The pattern was devised by Elizabeth Zimmerman in the late sixties, it is amazing, all knitted in one piece so only seams are across the shoulder and sleeves. One can add the stripes wherever, mine was guess work, I am quite chuffed how it has turned out. 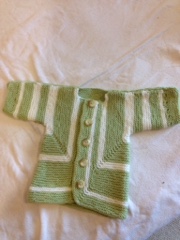 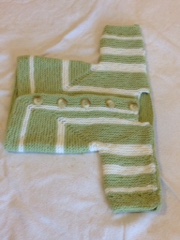 This photos taken before the final pressing.
Edward is coming to our home for the first time tomorrow so lots of hugs, today his birth was registered, after which the parents took him next door to the public library so he could have his own ticket. His father considered carefully whether he should be giving his son permission to have access to the library computers. Yes, that was one of the questions on the form.
One thing of which I am certain, Edward will have every opportunity to become a bibliophile, like his parents and grandparents.
Posted by PixieMum at 22:53 3 comments: Links to this post 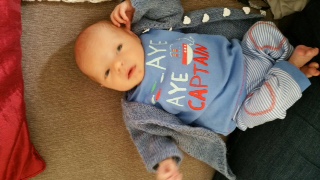 Am starting with today's picture of Grandson, now 10 days old, finally discharged from hospital after his check up today. He has spent most of the first days of his life in hospital, had jaundice, weight loss, an infection that wouldn't go so was attached to a cannula for regular doses of antibiotics.
Pleased to see him wearing the Peripuerium cardigan I made him, it is supposed to fit up to a 9 lb child, suspect he will be able to wear it for some time.
Have been working on crochet squares, now I have enough to join them to make a throw/ blanket.  Ian kindly sorted them into colour piles on the big tray I use to transport knitting and crochet around the house.  Must add I have a smaller Moomin tray that I use for carrying notions and small items from my study/workroom/den/spare bedroom/bolt hole to the sitting room. Most useful, it's about the size of a standard iPad or an old fashioned slate. 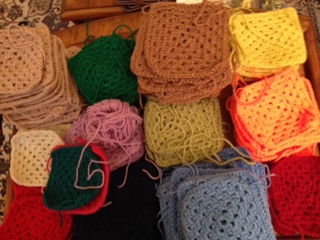 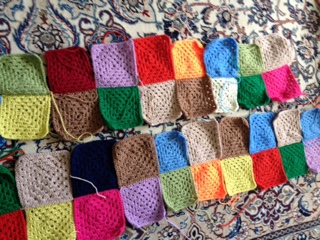 Then when I have joined up say 144 squares will arrange the strips to try and ensure each square is surrounded by a different colour. Not easy as I have a disproportionate amount of brown and beige but as this was designed to use up double knitting yarn and not to be a precious heirloom like the Beekeeper's  Quilt it doesn't matter. I ended up buying bright colours of Stylecraft yarn to compensate for the dreariness.
In between joining squares I have been working on a pair of socks for Ian, yesterday bought a second pair of circular needles so could avoid second sock syndrome by casting on, knitting to heel of second sock so will be turning heels of both simultaneously. 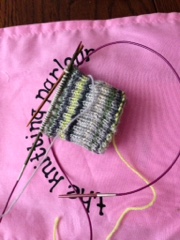 Have done a lot more than this, just for the record as this has become a craft blog.
Posted by PixieMum at 21:38 3 comments: Links to this post

Welcome to our world. 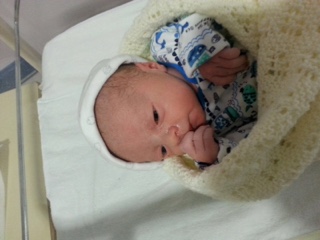 This is the first photo of him, as of yesterday he didn't look much different, he is so gorgeous, I've had a few cuddles.
Don't think I will forget where we were when we had a phone call from DS, we had just emerged from the Underground at Leicester Square, had walked up to Cambridge Circus when my mobile rang and DS told us we had a grandson.  Ian and I were on our way to the appropriate named Prince Edward
Theatre to see Miss Saigon, booked a long while back through the U3A theatre group.
That bulk booking meant we felt we couldn't really walk out, but neither of us enjoyed the show, the music wasn't memorable, the singing sounded like shouting with a noisy background, the raunchy action was over the top. Quite a few patrons left, there were plenty of empty seats, I could see why the admission price had halved and that the organiser had struggled to find ten people to go, we didn't read the reviews beforehand. Not often we don't enjoy a production, the last one I remember disliking was A Little Light Music at the Adelphi some 40+ years ago.
We have booked, optimistically for Guys and Dolłs for early next year. As my Mother always said "Something to look forward to". (She didn't worry about preposition and their place in a sentence, apologies to pedants)
Running low on iPad battery so more another time,  cheerio from this new grandmother, to be called Mama if you wanted to know.
Posted by PixieMum at 22:50 4 comments: Links to this post

Where? Kitchen completion, just two doors to be supplied tomorrow, one replacement and one missing from the delivery. 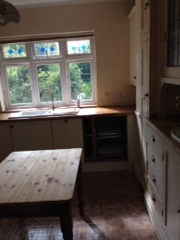 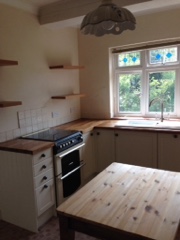 At least we don't have to worry about missing items, that was the beauty of using Magnet's subcontractors to install the cupboards, they take the stress and worry. First time we haven't directly employed workman so there wasn't the empathy, the familiarity of shared experience or the link of recommendations that we use usually. No complaints about the standard of work though, five days were allowed for this project, it was completed in less than three, not allowing for the doors as above. One unforeseen small detail was that the new worktops are a small fraction lower than the previous ones, after carefully ensuring that no tiles were broken we will have to replace them all, there is a gap between tiles and worktop. 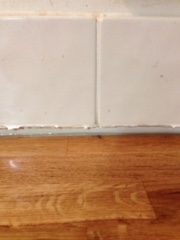 Doesn't look much gap in this picture but even one millimetre is a gap.  Also shows the real wood worktops in spite of the shadows from me and my phone camera for the shading is less extreme but will they be suitable for kneading bread? Maybe not as I use olive oil rather than flour when kneading so will stick to the glass board. (Pun intended)
It is about time for a knitting update, today I went to a knitting group in the nearby High Street's branch of Costas, after about a couple of hours had made progress of a pair of sock for Ian. The yarn is Regia Design Line Jazz Color by Erika Knight, purchased from The Knitting  Parlour in Malvern back in May. 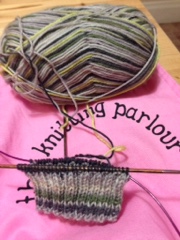 Isn't it fun when stripes of grey and greens become bands of colour?
Posted by PixieMum at 22:21 2 comments: Links to this post 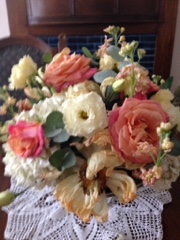 This lovely table arrangement was from my cousin's daughter's wedding, held at Nonsuch Mansion at the end of June. 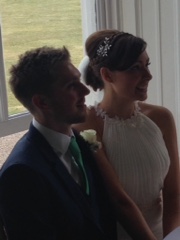 Not the best photo  of Marianne and Jack, taken just after they had signed the register, the official photographer had banned other shots during the ceremony, here they are with her parents in the grounds. 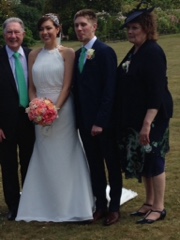 We were so fortunate with the weather, warm enough to sit out all the evening if one didn't wish to dance but not so hot that one was uncomfortable in finery.
It was a good deal warmer the following Wednesday when I went to Town to see High Society at the Old Vic, the air conditioning  in the South West train's quiet carriage, nor the next one wasn't working, in the next one all was cool. At the end of the journey I asked a smartly dressed businessman if he put his dirty shoes on the sofa at home, he was most embarrassed, admitted doing so without thinking as he was tired, I was quite right and he wouldn't do it again. I wish SW trains would make regular announcements about feet on seats, often am scared to say anything hence mentioning it as the doors were opening so I could escape onto the platform at Waterloo.
Just want to record something that is resonates with taking on new ideas. I came out of the Old Vic theatre with another lady who had been part of the U3A group, we needed to cross from Waterloo Road to reach Waterloo station, automatically I stopped at the first crossing at the junction of two roads. Whilst waiting a long while for the pedestrian lights, the other lady pointed out it would be quicker to use the crossing nearer the station for the lights just controlled one crossing and one line of traffic. Sounds so simple, but never occurred to me.
Life is a bit chaotic at Pixie Towers, the kitchen cupboards are being replaced so the contents are scattered around, this is the dining table. 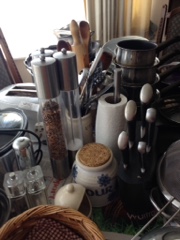 Also in the dining room are the boxes containing the new cupboards and fittings, 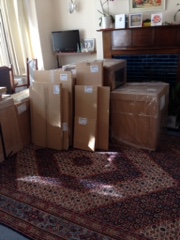 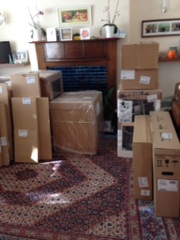 As usual will be recording progress, the workman arrived this morning, this is progress at the end of the day, carcasses in place, we can use the cooker if needed. 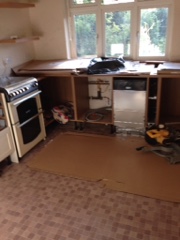