Black and white and read all over.

Looking back at my life I am aware that I have had a love of acquiring information and learning, not just in a formal setting but from all sources as well as the corn flake packet scenario. There were always newspapers in my childhood home, apparently when they set up home my parents had a serious discussion about which newspaper to have delivered, they chose the Daily Express and of the three London evening papers we had The Evening Standard. For those even younger than me I may have to explain that both these papers were quite different in 1950s than today, they were selected to be suitable to be read by my sister and I. Apparently my paternal grandparents wouldn't have a Sunday paper as that meant people had to work on the Sabbath, my Mother's logic was that they shouldn't have a Monday paper either for the journalists and printers would have been working on a Sunday for the next day's edition.

As my parents read them first and papers was broadsheet I became expert at reading upside down print, no separate supplements then to share, no colour, dense text and Stop Press. What happened to that, well today look on line for the latest Test score. Little snippets of memory remain, talk of Mr K, Mr B, Ike, the fashion drawings by Robb, later the articles about new cars ending with a "Will it fit into your garage?" question. Cars also of interest from a young age, walking to junior school I admired a new Morris Minor with cream body work and narrow red stripe. My Morris Minor was Alaskan grey, so boring. No wonder when I worked in a reference library I used to devour Motor and Autocar magazines, especially the line drawings showing all the engine and parts.  Not that I really  understood/understand how the engine works, all that talk of dinner plates working together went over my head.

Back to newspapers, at secondary school we had a newspaper wall at the back of our classroom, as I went home for lunch I would return with relevant cuttings from the previous day's evening paper, at one time we were studying Charles 1 execution, it was the end of January, a mention was made in the paper of the anniversary.  One of the prefect roles was to be in the school office in the early morning before the secretary came in, to answer the phone and take messages, in between I read The Times, fascinating with advertisements on the front page, like our local paper Richmond and Twickenham Times.

My fascination with print extended to magazines as well, my father managed to obtain the first Enid Blyton magazine for me, my cynical self didn't trust it as an illustration in February showed a girl in a short sleeved jumper, to my mind she wouldn't have been warm enough so that killed the whole story for me. Later Girl magazine arrived, full of beauty tips of how to make one' s hand soft using granulated sugar and olive oil. My Mother's magazines were more interesting, She was a monthly but the order for that was cancelled when a supplement "Everything you wanted to know about sex but didn't dare ask" was published, to be replaced by Woman. Like newspapers, so different from today's offerings, two short stories, a serial, knitting patterns and the Wooden Spoon cookery column and the mysterious agony aunt. 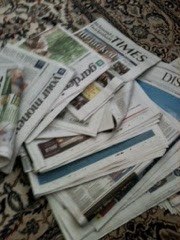 The photo shows what brought on this rush of nostalgia. Lounging around this Sunday evening it appears to me that I have spent much of the weekend reading newspapers, two Saturday's, one Sunday's and one free local delivered today, published on Friday.  Usually it is one paper a day, maybe City-AM a freebie and if we can, we grab an Evening Standard, in Waitrose yesterday another heavyweight paper went into the trolley, yes we spent more than £10. :)   Yes heavyweight, loads of adverts for stuff we don't need or want but lots of adverts means business must be booming somewhere. When the economy was dire the papers and magazines were thinner, well that's my theory, maybe like the urban myth of  the skirt length on the Abbey National logo.

Of course I didn't mention the magazine that went into the trolley yesterday, maybe more on magazines if I have time along with reading for Book Club, knitting and crocheting.

Posted by PixieMum at 21:28 2 comments: Links to this post