A light on my latest project.

From BHS we purchased a new lampshade for an onyx lamp base, the shade was just cream, no embellishment so I dug out some of the crochet cotton I had ever since I learnt to crochet at evening classes when I was in my twenties. 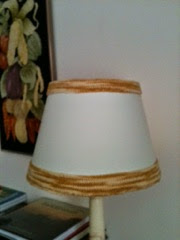 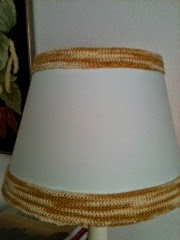 The trim was just a chain the length of the circumference of the shade, plus a little bit, then working backwards and forwards in double crochet until we thought it was deep enough. The work was joined into a circle and pulled over the shade. I had thought it would need some PVA glue but it has stayed in place.
Quite pleased that I have designed this, used materials I had, these bought back memories of the evening classes again.  The Internet, knitting shows and  groups have replaced evening classes for yarn work, but there must be other subjects where an old fashioned class would be helpful in acquiring or learning skills. Ian wanted to learn wood sculpture, he is experienced in carpentry and making models in wood, he enrolled for a Saturday class in the subject, then the class was postponed, then cancelled as the adult college couldn't find anyone to teach the subject.
Posted by PixieMum at 14:08 3 comments: Links to this post

Ever since childhood I have been aware that January is when marmalade has been made in my parents household and later in my own home since when  I have missed just one year. A more recent tradition has been for our Seville oranges to be bought in a local greengrocers, Cousins in Twickenham as one of the cousins go to Seville to buy the fruit. This year Ian was chided for being a bit late in buying the fruit, this was Saturday 17th, at one time this would have been early as my Mother reckoned the oranges were available late January and early February, now it seems immediately Christmas decorations are down one is into slicing fruit and squeezing pips.
I find extracting the pips, cutting, squeezing and finely - but not too so - slicing the fruit very relaxing and meditative, rarely do I put the radio on, I sit at the kitchen table, work through the oranges first then the lemons whilst my mind wanders. So calming. The fruit is left to soften overnight, sometimes longer if the next day is busy. This evening about three pounds of fruit was cut up, the last of our purchase, I had thought we had bought a bit less this year but as the first batch yielded 19 jars, my second 12 jars I think once again we will be giving quite a bit away in the hope we bring some culinary delight to the recipient.
When our son was very young, he pronounced marmalade as Mummielade, we were very amused when he asked very seriously what was Daddylade like! The first time he saw identical twins he said 'Oh look, snap babies' and quarrelling was 'fighting with words'.
As we hadn't finished all of last year's batches, I decided to make a Marmalade cake to use some more up, the easy all in one recipe is from Michael Barry's Food and Drink Cookbook. Have just looked at my signed copy, didn't realise it was published in 1991, it has Imperial measurements first and the inferior metric afterwards. 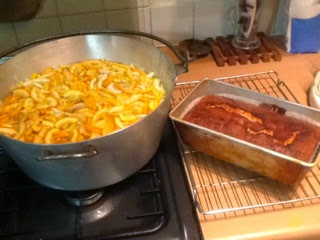 Marmalade and marmalade cake. Just remembered that my Mother used to make cake on a Saturday evening, by the time we were about 12 my sister and I would also bake. For a while I haven't made cakes but I enjoy the process, it is good to be able to offer a visitor a slice of cake, for we don't have biscuits except at Christmas, also I know what ingredients have been used rather than chemicals with long unpronounceable names.
Posted by PixieMum at 22:55 2 comments: Links to this post

The day just gets better

Not long after I had posted my blog Ian came home very pleased, he had popped into our local hospice charity shop and found this book, Sarah Dallas Knitting. It is published by Rowan in 2005, tried to photograph it. 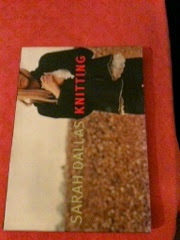 Not sure how to rotate photo, since updating iPad to 8 point something the ordering of photographs seems a touch chaotic, some duplicated, some I can delete, others I cannot. Editing seems a bit random too.
The book is lovely, not sure it would have been purchased new, I like the idiosyncratic way the projects are arranged by four colour themes, the patterns don't appear too difficult either. I suspect Ian has bought all the knitting books from this charity shop, he knew I didn't have this one, sometimes he calls to check first.
The knitting progress continued at the Knit Whits knitting group, The leader, Sally Cadle sorted out the problems I had with the heel of the socks I'm making, same pattern and yarn as this pair I made for Martha using the same instructions for sock knitting with magic loop. I managed them, why are these going wrong? Certainly I need practice in picking up stitches, not only for socks either, as this is not the first time Sally has helped me out picking up stitches. Utube here I come! I have so much sock yarn to use. Posted by PixieMum at 18:49 No comments: Links to this post

Our kitchen overlooks our back garden so it it is inevitable that we look out to see new growth and maybe view some birds returning to our feeders. Apparently the high winds blowing a bamboo plant have sent the little creatures scurrying away, we have trimmed the side shoots but the birds are slow to return.
This morning something else caught my eye, some bright yellow plants, now I thought every piece of the blank canvas out there had been covered with flowers last Autumn, additionally there are I have been told hundreds of bulbs to add to the kalaidascope of colour but these yellow delights were new. 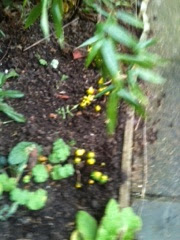 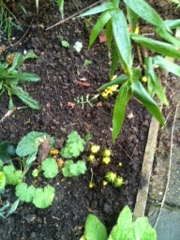 Not very clear pictures, sorry folks,  had to pop out in the rain using my phone to capture the moment. It turns out that on Saturday whilst enjoying a Mummy-&-Martha day wandering around Peter Jones, Ian was buying plants at the local garden centre. Didn't spot the new plants yesterday, felt guilty as I was in the kitchen.
Later today Kingston Garden Services are coming to discuss haircuts for some of our trees, especially the yew and bay.
Just adding, I bought myself another shade of blue Rowan big yarn to add to the stash for a cushion cover I plan to crochet. That is after I have finished the socks I'm making, the decorative crochet to trim a lampshade and then there is the red lace wrap that has not had the attention it deserves.
Posted by PixieMum at 12:44 1 comment: Links to this post