Well, it wasn't really sauntering, more determined striding out from Amersham to Chalfont St Giles by the pretty way, or steep way. A climb out of the town, across the fields, through the beech woods with ten others from the Church strollers group.

I did wonder if I would make the first part, lots of ventolin ensured I did, everyone was so patient waiting for me whilst I plodded upwards through stubble, mud and grass. Frightening at times as I knew my limbs were heavy which means not enough oxygen but managed to remember the breathing exercises, the steep part was about a quarter to one third of the first part of the walk then it was level. Lunch was taken at a pub, I think it was called Merlin's Cave, not quite sure. The parish church was next door, of course we had a peep at the church which was open, didn't look around as spoke to parishioner on duty. She had moved out from Isleworth where property prices too high for newly weds to Buckinghamshire. Today the position is reversed. 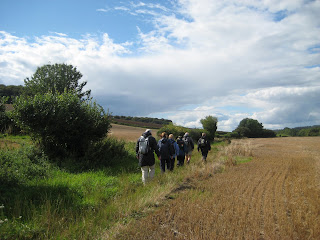 Our party split 7 - 4, some took the high road and were in Amersham afore us, the rest of us took the lower and level path still very interesting rather than returning the same way we had trod before. Picture shows those  who chose the flat route.

Did I mention that it was a rainwear on and rainwear off sort of day, some heavy showers, some warm sunshine? Plenty of ripe blackberries for Vitamin C, some of our party very clever at spotting bird life. One of my problems when walking is I'm so concentrating on the path or route ahead that I am unable to look around and take in the wider picture.

After we reached Amersham searched for a café for tea and cakes, eleven was a big party for the tiny establishments but we found The Crown Ian and I chose a cream tea with Earl Grey tea. Full marks from me cos no tea bags, proper leaves and strainers.

Ian drove both ways, going we were in convoy so I didn't need to help with navigating so started another hexipuff; coming back too tired to knit so think I will now go and complete the hexipuff. Would like to knit one a day. Ian has come downstairs after working at his maths studies so I will join him on the new sofa.

Here's a picture of progress so far:- 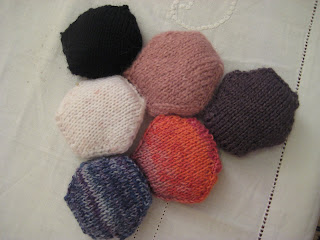 Haven't tried any fancy work or embroidery yet, am just making each one with different yarn to see how it works.

Oh, forgot to tell you folks, I wore my pink socks that I had knitted inside walking boots, socks were fine, no slipping down. As you can see, I have made a hexipuff in the same yarn.

Outside My Window ... sunshine after some very heavy rain. From the front of the house it is a cloudless sky now, a couple of hours ago it was heavy rain.
I am thinking ... I will need to do more at home so Ian can study, he does a lot of catering and we shop together, I viewed it as a break but he cannot afford such long breaks now.
From the learning rooms ... much planning by Ian as to how much time to spend on his TMA and how much on revision.
From the kitchen ... Ian has made his famous chocolate brownies.
I am wearing ... black jeans style trousers, grey and white horizontal striped top and charcoal grey cardigan.
I am creating ... Am making good progress with cardigan and have made my first hexipuff 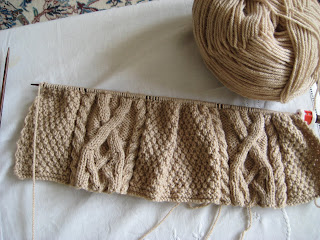 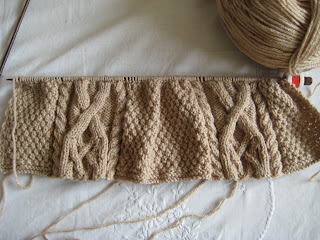 I am sure the yarn snobs will not like this acrylic but all the materials, yarn, needles and pattern were a gift and I think the cardigan is looking good.
I am going ... to try and help daughter with her job search. She has been waiting a while to find out if her firm would keep her after she qualifies, eventually she was told that she wouldn't. Gather this is usual, trainees are taken on, paid minimum Law Society wage, given much responsibility and then once qualified that is it. Two months isn't long in today's world to find a newly qualified post, especially as solicitors at the top of the tree are not retiring so no space at the bottom of the ant heap.
So, if any of you lovely people reading these ramblings know of vacancies in any part of England for a NQ solicitor who has trained in area of private law and commercial law we would love to hear from you. Martha has experience of conveyancing too; she has good IT skills as worked in web hosting company in sales and recruitment, also in retail. As you know she ran in the London Marathon and raised nearly £4,200 in memory of her friend who died aged 27 from this disease.
I am reading ... The immortal life of Henrietta Lacks. Finding it interesting but it is a battle between knitting and reading.
I am hoping ... Martha finds work and that there are no more delays with Adam & Juliet's house purchase. The solicitors for the other party have delayed the move by a week, there are only two in the chain and absence from work has been booked around the move.
One of my favourite things ... learning new skills. Well I have learnt Turkish cast on and how to cast off using 3 needles. All because like so many I have joined in the latest craze on Ravelry in creating Hexipuffs. They are stuffed honeycomb shaped pockets, 3" across and can be joined together to make a quilt from a pattern one can buy and down load, created by Stephanie Dosen. Here is my first, and so far, only one! 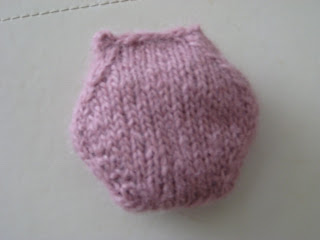 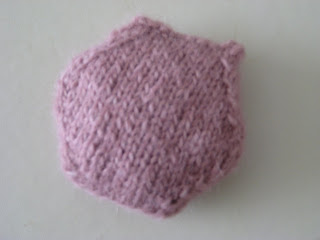 I used the alpaca wool from which my jumper and beret were made, although the pattern suggests left over sock yarn. From reading the acres of print on line on this subject I think any 4ply will be fine and I am sure clever people will make them different sizes from heavier yarn.
A Few Plans For The Rest Of The Week ... well, today is last day of the week but looking ahead am catching up with friends next week, giving a talk about Breathe Easy.
Not sure why some text has blue background but will leave it as I'd like to try another hexipuff - they are supposed to take half an hour to knit. Maybe that's when more than one has been attempted
Posted by PixieMum
Posted by PixieMum at 17:18 2 comments: Links to this post

Just in case you don't knit or crochet and thus do not peruse Ravelry I thought you  may like to see pictures of my second pair of socks I have knitted.

Although I am making a cardigan/jacket for myself from yarn and pattern received at Christmas from cousin, the socks have been my mobile knitting, the sort one does on the train or bus. As I use Magic Loop system it means no long needles so it is very portable. So now have to decide what my portable project is to be whilst knitting jacket at home when I can concentrate on a very complicated pattern.

Anyway, here are the socks, have worn them last evening when the temperature dropped. 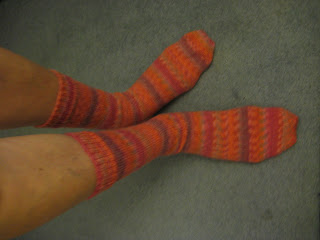 Think this colour has come out a bit dark and bit more orange than the yarn, but so what. They are on my feet, they fit and are comfortable. 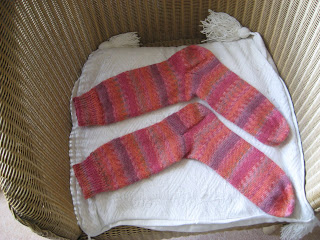 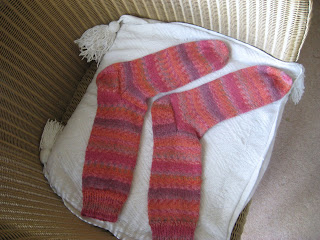 Two views of socks on cushion on another Lloyd loom chair, seem to photograph my knitting on these chairs all the time.

That's all folks, just pleased with myself.
Posted by PixieMum at 16:13 4 comments: Links to this post

Outside My Window ... Dark clouds, we have had some heavy downpours, much needed by the garden. Also, will wash away some of the dust from the building projects around here.
Yesterday evening we had double rainbows, 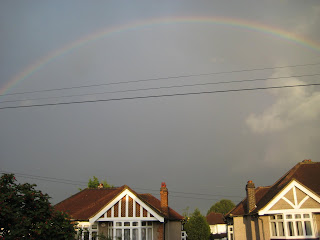 not very clear but views from the front of our house. 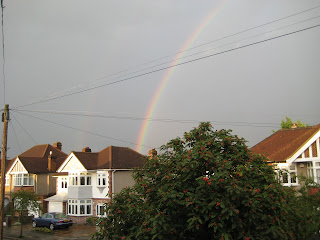 From the learning rooms ... Maths. What else? Ian has registered for M208 for next year, I said it sounded like a radio station not a study course.
I am thankful ... for friendship. On Thursday went to Hertfordshire to see friend, we used to share a house many years ago, have stayed friends. Took a toy for her dog, she chewed it to pieces in well under an hour. Haven't a picture of the destruction but here is the instigator. 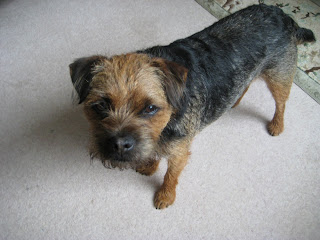 From the kitchen ... Nothing much, lunch included home grown runner beans, stewed apples of which some were windfalls and garden blackberries.
I am wearing ... Cotton rich natural colour trousers, pink & white striped overshirt and my blue socks that I knitted. Also wearing friendship bracelet, one of the pair I bought Martha and myself from www.poppysparkles.co.uk. Go and look at the lovely jewellery.
I am creating ... well on with second pink sock, nearly at the toes as I knitted a lot on all the trains on Thursday, at the doctor's surgery and waiting in the chemist on Friday.
I am reading ... The immortal life of Henrietta Lacks. First time reading group has read a non fiction book, it is fascinating and so much better than the Twilight book.
I am hoping ... no more mozzie bites. The prayer and meditation group on Tuesday sat in a garden (the Vicar had double booked the church) and I came back with rather itchy legs. Should have gone to pharmacy earlier, left it till Friday so sent to doctors. By then swelling down a little, so just ointment but as usual brilliant liaison between practice nurse and GP to check my medications.
Around the house ... we have bought new lamps for the lounge, pictured below.
One of my favourite things ... probably said this before, but I appreciate my Freedom Pass so much, and the Senior Rail card. Anything better than driving on the M25, a chance to read, knit and people watch.
A Few Plans For The Rest Of The Week ... nothing special, although have emailed a couple of people to see about meeting up so Ian can study uninterrupted. Feel I must make the effort, otherwise I could be quite a recluse as happy with my own company. At least I escape the building noise if I go out. View belong taken from back bedroom window, our kitchen Dutch blind can be seen to give some perspective. 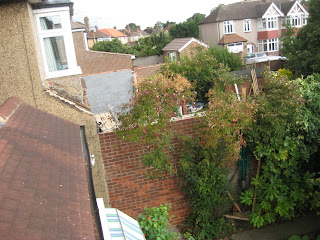 A Picture Thought I Am Sharing ... of the new lamps, seem to have lost the top of the lamp but the large picture is really too big. You can see the nearly completed sock on the cushion too. 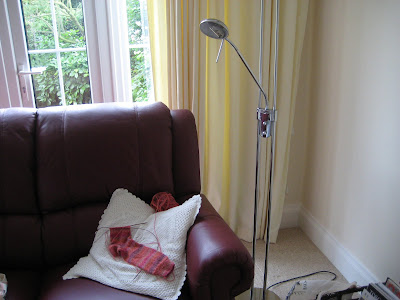 About time to go and read the Sunday paper, have just read the main section, now to curl up on a sofa and catchup.
Cheerio, enjoy.
Posted by PixieMum at 18:27 No comments: Links to this post