Yes, we have been travelling, over the seas in a plane to Ireland to Killarney, Ring of Kerry and then Dublin.
As I didn't kiss the Blarney Stone when we went to Blarney Castle it may be better to post a few photos, some taken with my iPad as well as my traditional camera. Not sure traditional is the right adjective for a camera that doesn't have a roll of film. We were impressed with the widespread availability of Wifi, even in the hotel bedrooms, so I was pleased I had taken my iPad, but regretted I'd forgotten the widget to transfer photos from my camera. 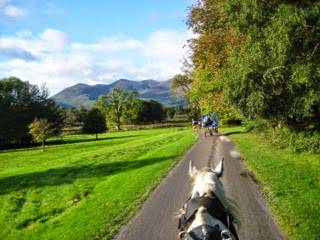 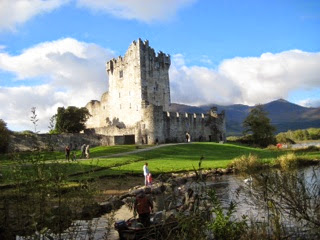 We travelled to Killarney National Park by horse drawn Jaunting Cars, sitting up front by the driver so had delightful views as Bluebell pulled the car towards Ross Castle.
In the afternoon, it was a boat trip to Garinish Island, a bonus on the way were seals on a quite small rock, pity the vessels couldn't get nearer. 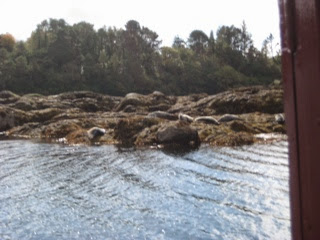 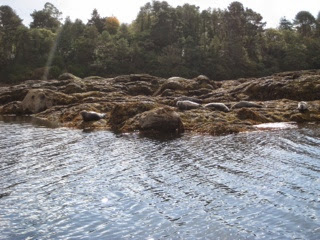 For some reason I don't appear to have photos of journey around the Ring of Kerry, there were plenty of Kodak Corner opportunities, instead my memories are of friendly people in towns and villages where we stopped for breaks, clean and tidy settlements with no graffiti. some of the houses reminded me of American style, single storey with three windows, two to one side of the door and one on the other side. The grounds surrounding homes seemed all laid to grass, few flower beds, formal layout  or trees, all very neat and slightly severe.
Next three illustrations are Blarney castle, just to prove we went there whilst transferring from Killarney to Dublin, wouldn't want this post to be a pile of blarney. 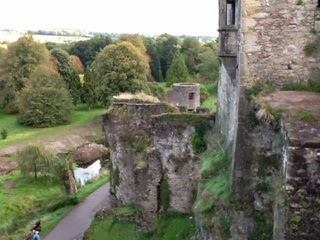 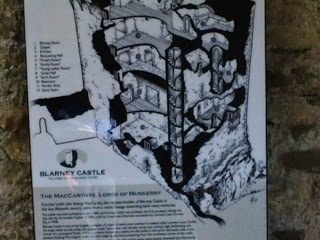 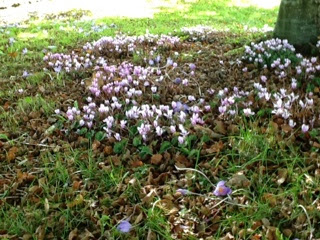 Just thought these Autumn bulbs were beautiful, spotted in the grounds.
On the penultimate day we decided not to stay with the group who were visiting Wicklow Mountains, some more gardens and a rebuilt stately home but to wander around Dublin on our own. We had been shown Dublin's highlights from the coach, one evening we ate in Madigan's Bar where one of the staff advised us it would be more interesting to see the city. It may be gathered from my witterings that we are townies, not against the countryside as such but sometimes we need a break from viewing countryside from a coach, to look at the architectural details or the plaques of a building, to window shop or people watch.
Our coffee break was in Dublin Castle, very impressed with yummy cakes everywhere, also wide availability of different teas and coffees in quite remote small places. A short walk brought us to Christ Church Cathedral just five minutes before the daily said Eucharist started at 12.45, it was meant to be, we hastened to the Lady Chapel, the words used were from 1928 service, so familiar from my youth, yet one had to think what the words meant. It is one of our traditions to try to go to church when we are on holiday so playing hookey from the rest of the party played unexpected spiritual dividends. 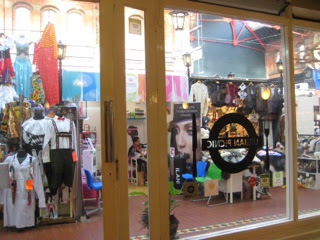 Lunch was taken in a cafe called Urban Picnic, the owner and chef made us risotto from scratch, so delicious, his CV was on the back of the menu, he told us he hoped to open a restaurant in London. Great meal, although it must be said it wouldn't be good if one had a tight schedule. The cafe was in St George's Arcade and had been recommended by the owner of a secondhand bookshop in the arcade. He even closed up the bookshop to take us to the cafe, the shop and it's owner recalled a play "The Index has gone fishing" seen on TV once.
Nearby was Powerscourt Centre, a rather upmarket shopping experience, it just happened I knew there was a yarn shop there, This is Knit again friendly staff, I came away with this Dublin Dye Company Yarn with which to make socks, also bought Debbie Bliss DK.  I had taken double knitting yarn leftovers from various projects to crochet whilst travelling, my supplies looked likely to dry up before we returned so chose a lovely scarlet. I will need to make 144 Granny squares for a blanket, this is becoming my travel project once the Beekeeper's Quilt is completed. 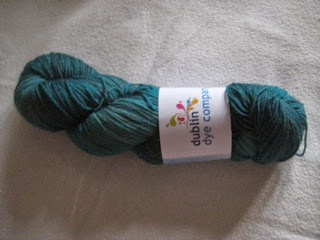 To return to our trip away, just have to add we were fortunate with the weather, we had been delayed out of Heathrow because of rain and high winds, yet until our last day we had mostly good weather until the last day when we visited the Botanical Gardens on the way to Dublin airport. We had a tour, emerged from the glass houses to rain so weren't able to walk around so much time had to spent in the restaurant.
Posted by PixieMum at 21:06 5 comments: Links to this post

This past week has been one where we have been out and about, last Tuesday evening found us in Richmond to hear a talk from Simon Thurley about Richmond, its palace and the name change from Sheen.  We parked near The Green and walked along the towpath to the Old town Hall as the light was fading, took these pictures of one of my favourite views, especially with the Hill beyond the bridge. 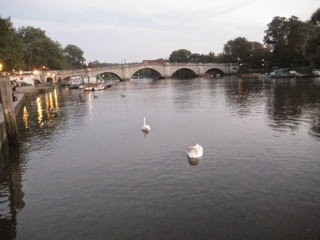 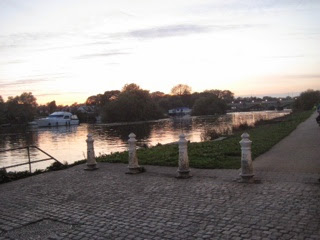 This is looking in the other direction, i.e. towards London, we are so fortunate to have such scenery on our doorstep.
Wednesday was another day out, in the morning we went to the Tower of London to see the poppies in the moat, a moving way of marking the hundred years since the First World War started. Again we are at war, why cannot we offer humanitarian assistance instead of dropping bombs? Probably far too simplistic that we became a neutral nation instead of rushing in to each conflict. 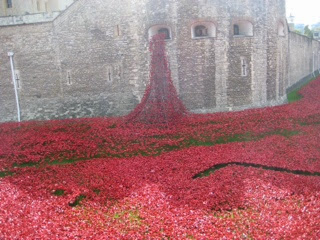 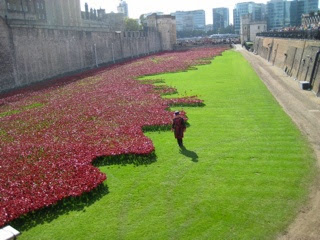 The red in the uniform of the Beefeater mimics the poppy red.
After lunch Ian and I went our separate ways, he saw the Ming exhibition at the British Museum whereas I headed for Tate Britain to meet Friend P. to see the Late Turner exhibit. We were slightly disappointed, it seemed in some rooms that as the gallery has all these late works of Turner they had better show them, but for non specialists they weren't very interesting.
The answer to this was tea and cake, a most scrumptious chocolate cake, made without flour and a thick layer of chocolate on top and side.
These refreshments stood us in good stead, our journeys home were horrendous, it took P. four hours to reach Harpenden, problems at St Pancras.  My journey took a couple of hours, Ian and I coincidentally were travelling on the same District Line train - not that we knew it at the time - the train was shown as going to Wimbledon but suddenly announcements were made to transmogrify it into a Richmond train. Maybe that was why the train was so packed, fortunately a few stops after Victoria a lady offered me her seat, I was grateful for the train was crowded all the way. As I was seated at the front I just managed to catch the late running Windsor train at Richmond, Ian wasn't so fortunate so had a 25 minute wait for the next Whitton train. Neither of us could believe how busy London was, it hadn't helped that the Circle and Hammersmith & City lines were partly closed. On Thursday I was in Richmond, volunteering at the local archives, again the traffic was jammed up so instead of travelling home by bus I took the train, the station and train was busier than I am used to.
Posted by PixieMum at 21:20 1 comment: Links to this post