It has been a busy weekend, now sitting down to review it once Son had driven away with his two children safely in the back. Daughter-in-law was singing with Military Wives Choir, so she couldn’t be with us. It was too hot yesterday -Saturday - to go far so apart from a trip to the High Street for newspaper rest of day in shade in the garden or in the house with curtains closed on the sunny side, front in the morning and back afternoon and evening.

Today we went to church, grandson went with his grandfather to junior church, charmed the ladies over the coffee, discussed having his hair cut and the problem of his curls with an eighty something parishioner. I was criticised by grandson as he considered his mother’s Moorland blanket hadn’t grown much since he saw it last, he noticed we’d changed the furniture around in our sitting room and remembered he and his sister had chosen the colours of these glass watering globes over a year ago.  I so underestimate this child who isn’t yet four.

His sister is very different from him, she’d refused to eat any lunch, suspect she shouldn’t have been given her a drink with food, was put upstairs for a nap, shortly after we heard a thump, Son rushed upstairs to find his daughter had climbed out of the travel cot, onto an adjoining bed and then had fallen from that. Any attempt for a nap was abandoned, next time she stays she’ll be sleeping in the bed.  Yesterday she had walloped her brother with a stickle brick, he protested without retaliation, she immediately went to sit on the bottom stair before Son could send her there.

Have tried to annotate photos, didn’t work, all deleted, so will upload them without comment. Should be a picture taken by Son of his children together, a picture of the globes I mentioned and the children  indoors with stickle bricks to avoid the 34 degrees outside. 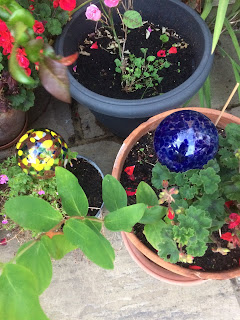 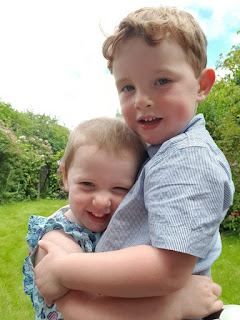 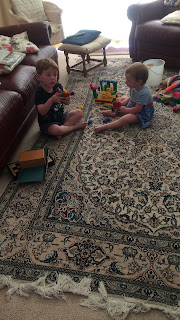 Posted by PixieMum at 22:09 2 comments: Links to this post

Yes! Forty years and one week ago Ian and I were married by Archbishop’s Special licence five and a half months after we met at an IVC New Year’s Eve Party in snowy Twickenham. (IVC is Inter-Varsity Club, established many years ago to provide social, intellectual  and sporting activities after university or college, there was an interview before one could join).

We are no longer party animals, I wrote about the May Norwegian cruise, for the actual anniversary we went to Bath for a long weekend, train from London via Reading to Bath Spa Station, then taxi to Roseate Villa, https://www.roseatehotels.com/bath/theroseatevilla/stay/.  On arrival, tea and cake and news that we had a double upgrade so instead of overlooking the garden at the back we viewed the large trees bordering Henrietta Park. Amazing breakfast menu too, all bread and cakes are made overnight on the premises, there’s a breakfast chef so every was freshly cooked

Apart from pottering around, we took two bus trips, one around the city with a great live commentary from a would be comedian, yet still informative whilst providing amusement. The second bus tour involved plugging in ear pieces for prerecorded spiel that didn’t quite coordinate with the bus timings.

On Trinity Sunday as it was our actual anniversary we went to Bath Abbey for 11.15 Sung Eucharist, held in the newly reordered East End, apparently the first day using the space in a different way. It was successful, Bath Abbey is technically an ordinary parish church, but wow, not many ordinary parish church has a choir of such magnitude, the Abbey Choir of Girls and Lay-Clerks, nor do they have singing in Latin. Felt quite emotional, a mixture of the the service, reminiscences and thanks that we still delight in each other’s company, laugh together, read each other’s minds.

We were much taken by the comfortable chairs that have replaced pews, the pews were damaging the sinking floor, chairs allow for modern worship we are and can be moved easily to allow space for wheelchairs, this had happened at a previous service, something that would have been impossible with fixed pews. 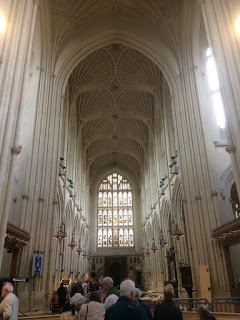 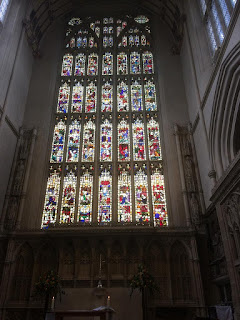 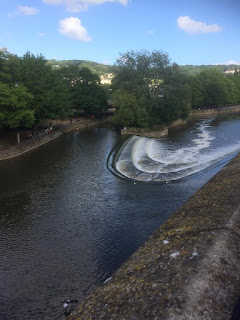 Our journey back was uneventful, it did occur to me how narrow and cramped the train seats were, on Great Western Railways luggage space has been removed to make space for more seats, if I were travelling alone I wouldn’t have been able to lift my case onto the luggage rack. It was my insistence that we travelled by train rather than drive, hopefully far less stressful, I had it in my mind that one could get up and walk around or even stand so not sitting for too long. Not possible, however, we had a walk around at Reading as we changed from South Western Railways to Great Western Railways. South Western gains were very old, if a tad more seat room but with no air conditioning, the carriages are used usually on the Kingston Wimbledon loop line, not on a ninety minute journey from Waterloo.

Will add photos, if Blogger lets me I will attempt to add a caption.

Photographs from Roseate Villa showing the building, our twice upgraded room, the sweets, the view. 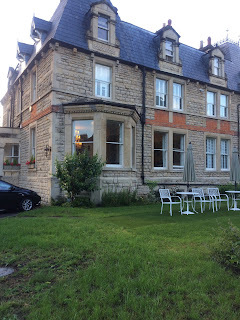 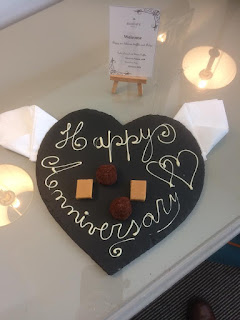 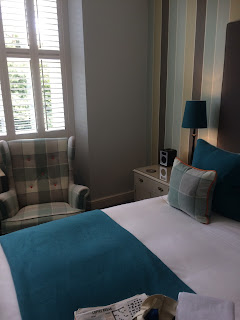 Posted by PixieMum at 23:12 2 comments: Links to this post

British Banter is a Ravelry forum, last Saturday a group of around 30 knitters & crocheters met on 4th floor of the Royal Festival Hall, close by the singing lift. It takes courage to join a crowd of ladies, some of whom you have met before, but cannot remember where, when, their Ravelry or real name!

In the event, I didn’t even have a chance before I was recognised by Joy, after a while it was suggested that I may like to take my coat off! So for about 5+ hours people moved around to chat with others, laugh, eat, some goodies were bought to share. Time went very quickly, the stories knitters bring about their lives and interests seem to be so individualistic and varied that it was delightful to listen and learn about people who had been just a non-de-plume online.

I came away on a high that has lasted, even the broken down train at Mortlake station that delayed my journey home, hasn’t altered that, annoying as it was at the time. It was good for me to cope with a large number of people, didn’t feel overwhelmed but then the chairs and sofas were spread out. 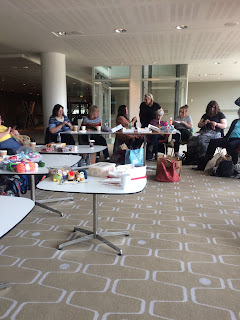 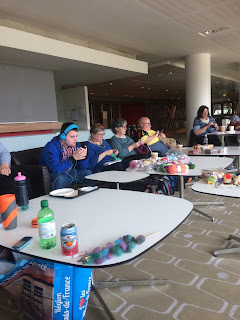 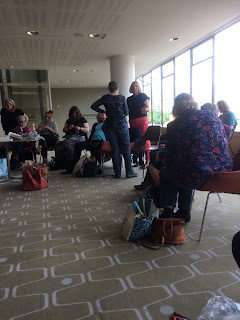 These last few weeks have been busy, some routine events such as volunteering at Local Studies, Pilates class, half term meant no art class or singing for Ian, we went to a talk about diary collection held by the Bishopsgate Institute and sadly, yet another funeral.

The local resident who died was one typical of suburbia, born before the war, bombed out, an evacuee, Boy Scout, devoted husband, one for whom friendship and family were important, worshipper at  chapel, an engineer who repaired his children’s toys and family belongings, supporter of the local football team, a father who chauffeured, supported the children’s  activities and interests - altogether a good bloke, eventually lost to dementia. How many thousands like him grew up in the post war years in those semi-detached 1930s homes with a culture of duty, church, discipline to become stalwarts in  business, civil service or military whilst accepting how things were. Although of an earlier generation my father’s family had and have still in some this idea of duty to others.

Last Thursday we heard a most interesting talk by archivists from the Bishopsgate Institute about their collection of diaries, not just those of the famous, great and good, but of as they said those diaries of the great unwashed, the common man whose observations about national and international happenings were as interesting as the personal details of their own lives and thoughts.

Taken from the speaker’s PhD, the description of why people keep a diary, what kind of person and the recording nature of diarists did resonate with me. Unfortunately I haven’t kept all the diaries, my oldest is a  Boots scribbling diary of 1962, much considered with food, weather, school life, times of getting up and going to bed, then later ones cover late 60s when I was at college until 1979 when I met Ian.  It is a sad fact that years when life was exciting and busy I was less likely to record events. If I donated my diaries to Bishopsgate there may be some judicious use of Snopake, it was comforting to hear that one can put an embargo on the diaries. I will tell my children of my wishes, as the diaries predate them there should be no problem, Daughter and I have had a laugh already about my entries in 1962.

Blogs weren’t considered as diary entries, not sure if they would be accepted if printed out, has made me wonder whether I should return to pen and ink again, no one else would see it and send me emails  that resulted us leaving a ‘family’ with which I had been involved since my early teens. For the past 40 years a pocket diary has sufficed, each is full of details of appointments, contact details, I still use a Filofax, it is heavy and too big for a handbag laden down with knitting and crochet. 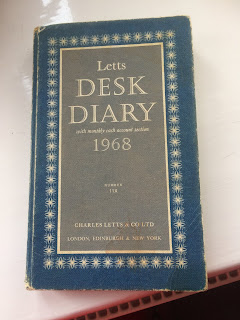 Posted by PixieMum at 20:25 No comments: Links to this post