A first for us

Ian and I looked after our grandson last Thursday from midday until his parents returned, they had been celebrating Daughter in law's father's birthday. ( Pedant alert: I was very careful with those apostrophes).  It was the first time we had been responsible for Edward alone, so first trap for the unwary grandparents was lunch, first assemble the high chair, then choose meal. Fortunately our Treasure was here, she has a nearly 4 year old grandchild so guided us along the way, otherwise baby would have had his nappy on the wrong way round. 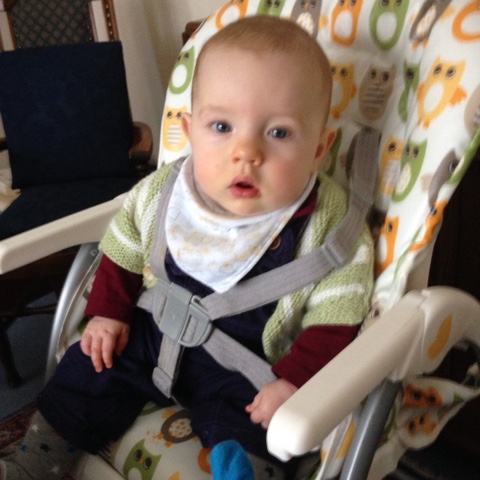 After Edward's sleep, we debated whether to take him out to see the delights of our urban village, but decided against it, the pushchair looked too much of an obstacle course so we played with him instead. 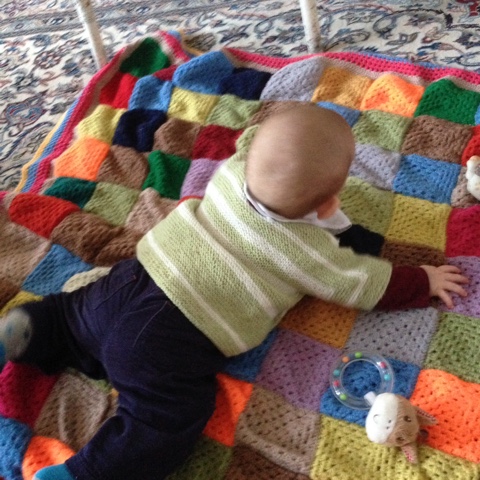 Reaching out on the crochet blanket, wearing the Baby Surprise Jacket, it is becoming a little small for him, won't be long before his new jacket is finished, I have started the first sleeve. 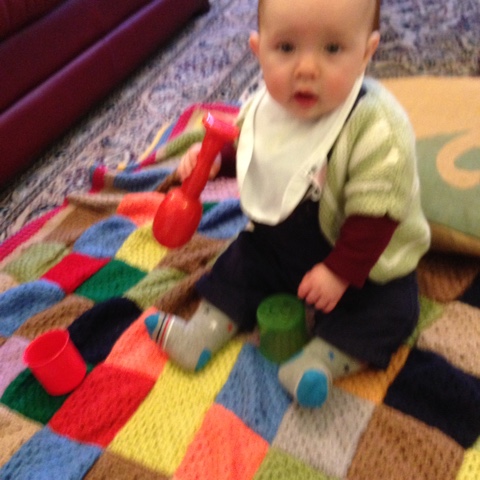 Not a good picture but he was happy sitting up and playing with his toys, he has become a smiley baby, yet like his father he can be serious too. We managed supper, bath and bedtime too, he wasn't very impressed with Janet & Allan Ahlberg's Peepo, for some reason we still have our children's copy. Maybe he was tired for he fell asleep immediately, we heard little snuffles through the monitor, all was quiet until his parents were home about 11pm.
Friday and Saturday we couldn't believe how tired and shattered we felt, it was a foggy exhaustion, the awareness of the responsibility, how everything has changed since ours were little, the time taken to feed a seven month old child even one who enjoys eating, the fact that he didn't cry or scream has given us the confidence to do it again when we are needed.
Posted by PixieMum at 13:20 4 comments: Links to this post