I wish to carry on blogging, my iPad and Blogger do not seem so keen on contributing to that, I was unable to upload my photos, you did want to see the socks I have just finished after a year of on and off knitting didn't you? I am typing this on my laptop, however I have not uploaded photographs on to the laptop so this is not a solution either. It doesn't  seem possible to add the labels or to link back to earlier efforts.

When I have attempted to comment on other blogs using Blogspot it has been most difficult, although I know I am guilty of not commenting on blogs it is part of my attempt to reduce my screen time. I like to have a blog as a record of my life for such mundane domestic events such as when did we update the kitchen or record my crochet and knitting projects for example.

If you were yearning to see the socks I finished I have posted pictures on Instagram as @thepixiemum. This platform is good for picture heavy postings but not for musing,  Will head over to wake up Wordpress again if that will provide what I need.

A week ago we heard that Ian’s brother, Gregor had died in the early hours of that Monday morning. We had been expecting the news for four weeks, he had fallen, dislocated and broken his shoulder, taken to nearest hospital, had a massive heart attack, not his first, transferred to a specialist hospital.

Ian was able to see him for about 30 minutes the week before he died, the only visitor apart from his wife and children who were at the hospital all the time. Gregor was very matter of fact, told Ian he would die in a few days.  It was a comfort for Ian to be able to say goodbye, but the death has hit him very hard. The brothers grew up in a close knit military family, very much a unit, Gregor was six years older, looked after his little brother, it is through Gregor inviting Ian to attend an IVC new year’s eve party that Ian and I met.

I would have  liked to add a picture of the brothers, Blogger doesn’t want to let me, nor does it let readers comment. Pictures can be added to Instagram but that is really what that platform is about, this for me is more of a thoughtful and journalistic place with fewer photos.

I do wonder about the need for secular Bank Holidays nowadays, Even more so after GB Ltd has had to shut down because of Covid-19. When instituted in nineteenth century there were few paid holidays, for many years offices and schools were open on Saturday mornings, today working hours are shorter, when I started work it was 9.00 to 5.30, Monday to Thursday, Friday one finished at 5pm, holidays were three weeks and two days, fewer Bank Holidays, no May Day, no New Year’s Day, no flexitime.

Bank holiday means TV schedules are changed, loads of sport, bad films, the TV is showing Mamma Mia:  here we go again, it is so bad none of the fizz of the original. At least we had University Challenge, what a wipe out, waiting for Only Connect to return.

Gradually I am venturing forth more, yesterday we went to a not so local garden centre in Shepperton, felt safe there, staff were masked, it was spacious, here was a good display of birthday cards, a haberdashery area within the craft section. The yarn was all Stylecraft, grey plastic needles, but joy, Knitpro waves crochet hooks. Now I have a set of these in a fancy pink case, however I don’t like to take a hook from the case out of the house in case it’s lost so stocked up. Bought some Classique cotton, have been making face cloths for daughter-in-law to use instead of disposable wipes, better to chuck these in the washing machine rather than disposable wipes in the bin. 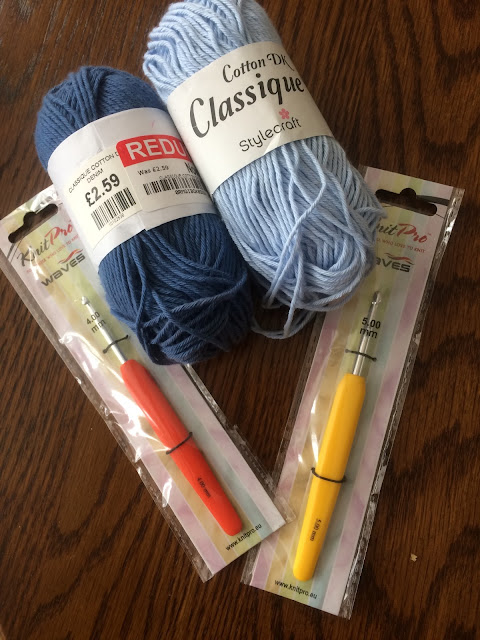 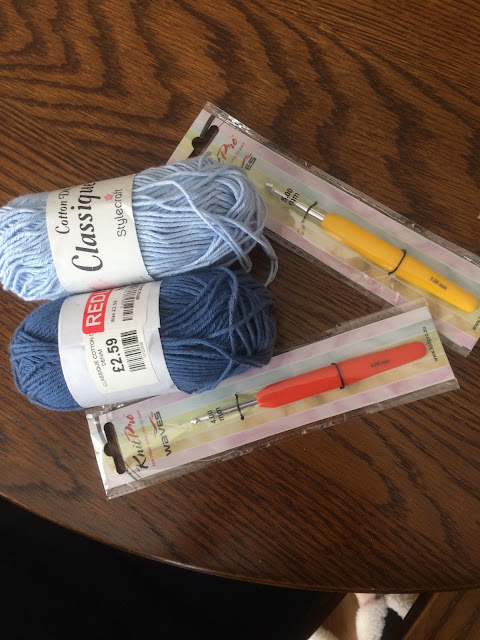 Thinking about the day I don’t feel I have achieved much, too much time was spent trying to solve the moderate sudoku and the ‘quick’ crossword in the newspaper, the ones in the freebie Metro seem a little easier, occasionally I can manage all three, easy, moderate and challenging, we both try to do them so Ian picks up two copies, Metro isn’t available on Bank holidays of course.

It has been another unusual day in that Ian was out, for the last week  along with others he is painting walls, doors and woodwork in a vicarage which has been empty some eighteen months. The building is to be occupied by four interns who during the year will decide whether ordination is for them, each will be supported by and assist in a different parish.  They move in on September 12th so there has been a concerted effort to ensure the house is furnished, equipped and welcoming. Although the main task has been to preparation for this, Ian has gained so much working and chatting with other people, lockdown is not kind to him, he has found it very difficult to isolate, he misses his choir, U3A activities, family, monthly men’s group and the normal church services so to see him happier, more energetic in spite of physically working hard has been such a bonus. 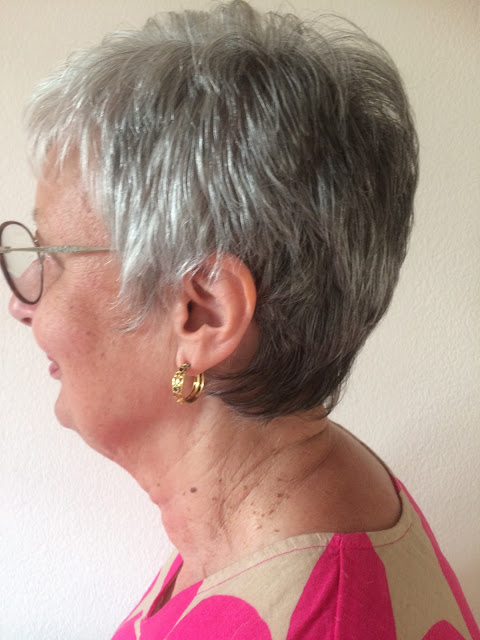 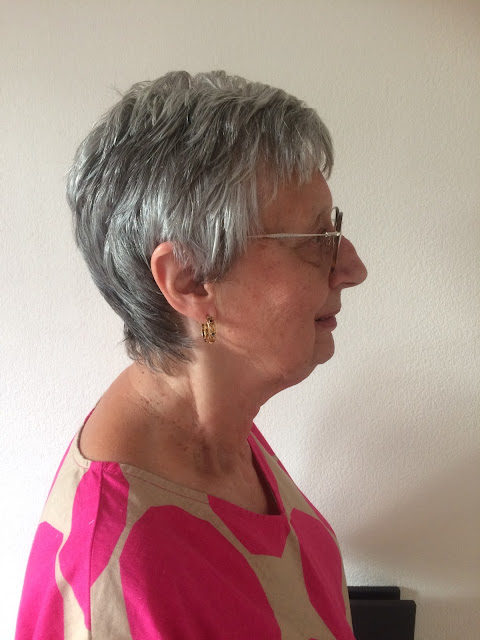 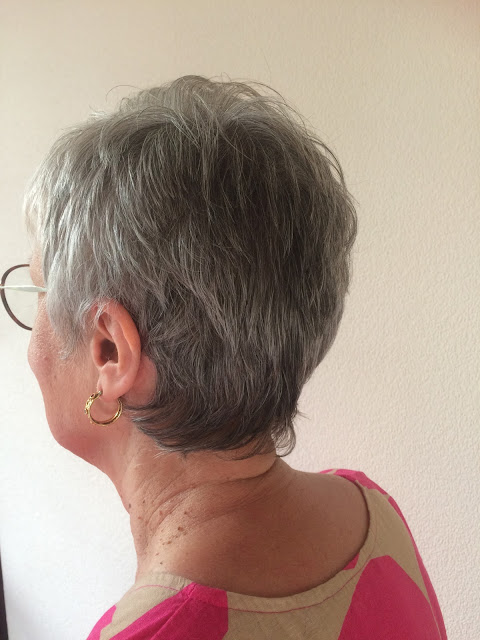 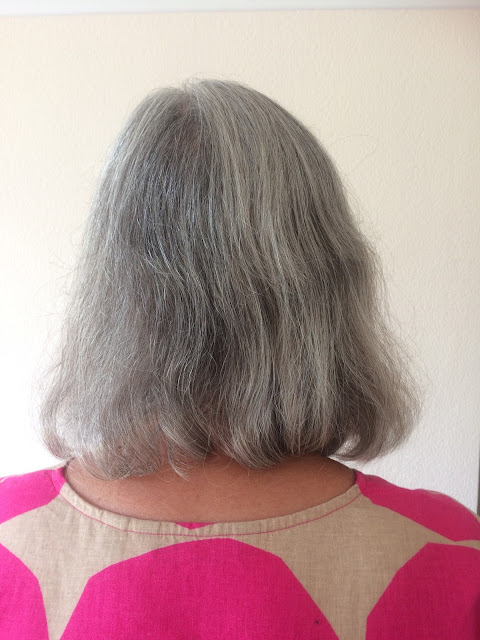 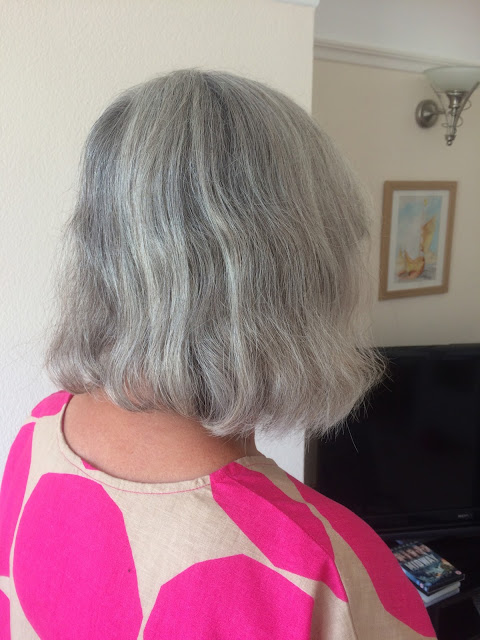 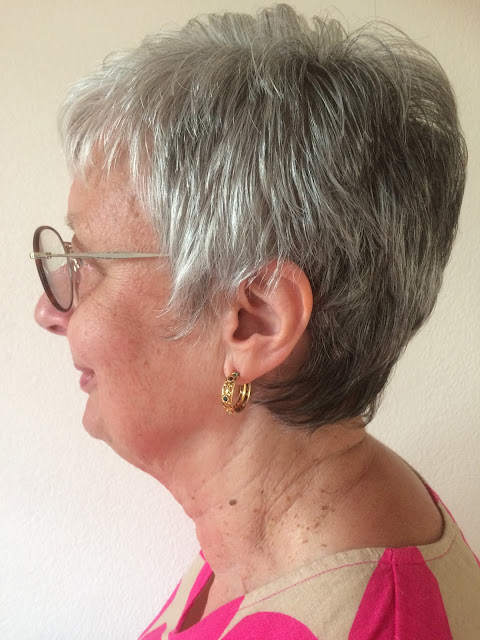 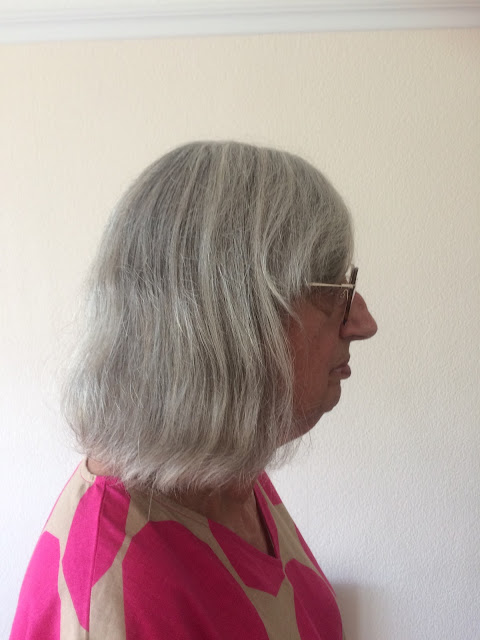 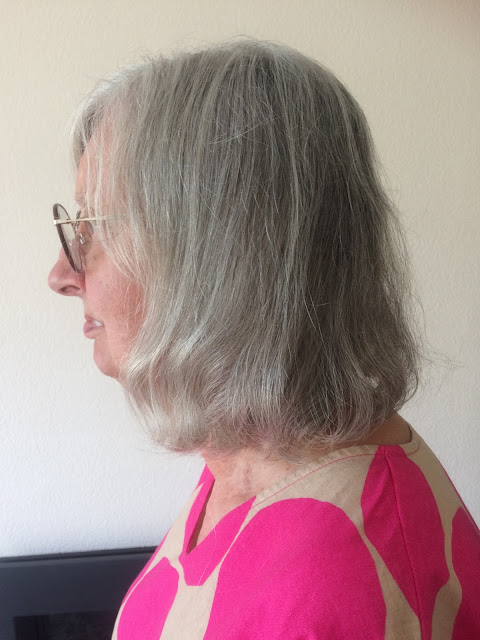 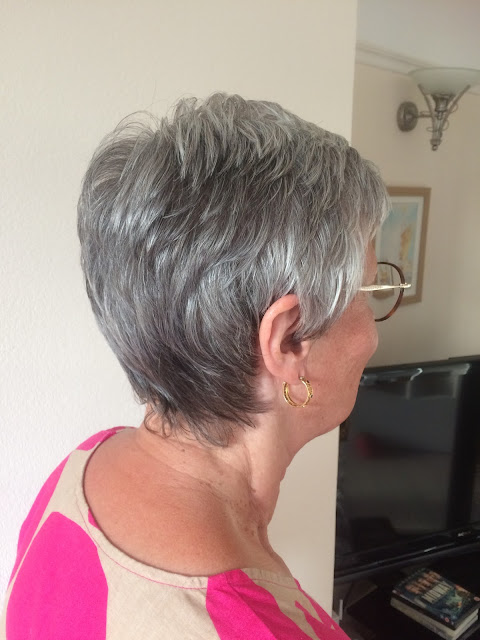 Photographs have come out in the wrong order, as I am struggling with Blogger I will not delete and start again, more important is to show what a difference a haircut makes. It is five months since I had my hair cut, before it was a classic bob, fringe, all one length style of Anna Wintour and Esme Young. Considering how muggy and hot it is the new style is a bonus, now earrings don’t get caught up, no more hair blowing on my face or in my eyes. I feel liberated, such a boost to my well being.

My lovely hairdresser Simone, had cut Ian’s hair last week out in the garden, she was so careful with masks, wipes etc, that I decided to book her in to have mine cut last Thursday as the weather was dry and not windy so we were able to be outside again. All the cut hair went into the compost bin.

This is The Day that  day I left Pixie Towers to walk around the block, well a few roads on our suburban 1930s estate after one hundred and thirty days at home. My motivation was actually exercise, I hadn’t walked anywhere except around  the garden and more frequently up and down stairs so I was concerned I would struggle to walk.  It was not so, nor was it today when I ventured out today. Of course I wasn’t on my own, Ian who has sacrificed so much to care for me walked with me both days.

More good news, our son, DiL with Edward and Alice came to our home last Thursday, it was Edward’s fifth birthday, here they are surrounded by crochet blankets. This photo appeared in WhatsApp later, a surprise as I didn’t know it had been taken. 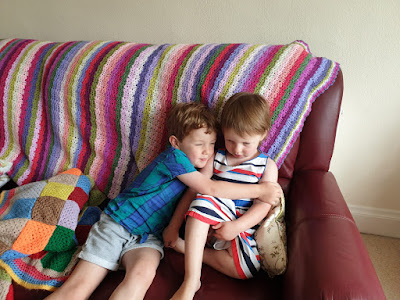 Just an update, the walk for exercise has continued, yesterday we walked the same route in reverse and on the opposite side of the road  around the estate to the day before, today at about 6.15pm we ventured out to the local High Street, the thoroughfare has wide pavements, there is a slope near the railway station so it was good to see how I’m coping with walking up gradients, all was fine, we didn’t go into any shops, there was a sad air about the place but that maybe the hour.

Emails have arrived, events are opening up, there is a new book coming from the Reading group, none of us appear to have enjoyed or in my case completed Dear Life by Alice Munro, after reading the new title a gathering in a back garden with the relevant caveats will be held. I hope the weather gods are listening.

Emails too about a meeting of the SW London Knitting & Crochet Guild, one in a cafe and one of Zoom, my followers know I shall be attending the latter, my courage doesn’t extend to travelling to Kingston and entering Jax’s cafe, good as it is in normal times. This branch of the guild usually meet on the last Saturday in the month so a return to custom.

Emails arranging deliveries of more face masks were written, the masks were delivered by the shielding cardiologist who makes them later in the day.

On that note, I shall close, post and go to bed, too  tired to do much if Blogger has a hissy fit as it is prone to do. 🦢 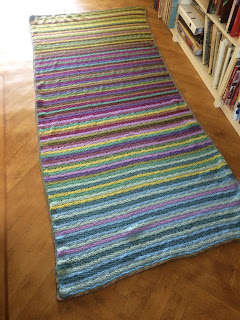 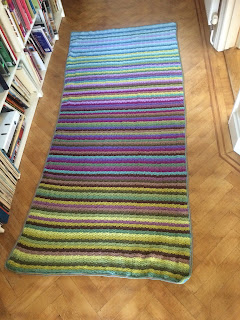 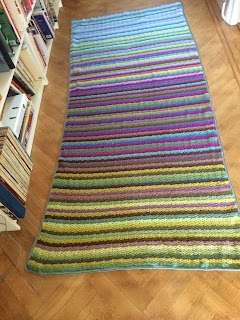 This Attic24 blanket is the reason blogging has been tardy, there was a deadline for handover, I reached it, without the help of Ian doing even more domestic chores than he does already and my abandonment of blogging, sending emails and any limited social life it would not be complete.

Basically it is trellis stitch rather than neat wave, the colours of the Yorkshire Moorland are in the same sequence, the border is the same stitch as the original. In between starting in May last year and now other smaller projects have been completed.

Now to use more of my stash, firstly to finish Ian’s toe up socks, then maybe another shawl for me for I am a chilly soul. Plenty of time, still haven’t ventured forth.
Posted by PixieMum at 14:25 2 comments: 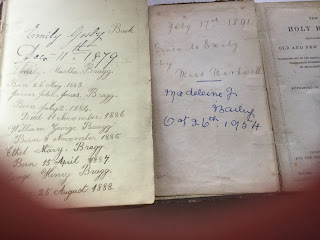 Firstly apologies that the pictures have come out so small, technology has beaten this old dear.

The frontispiece on the left above and underneath below is from a Bible belonging to my maternal great grandmother, Emily Gosby, what is interesting is the date  - December 11th.

The Bible on the right above  and top below was given to me by her  daughter, my grandmother  on October 26th.

Our children’s birthdays are December 11th and October 26th. 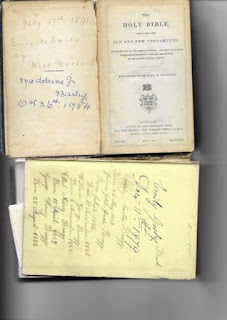 Spooky, coincidence or just one of those things?