Life has been busy chez Pixie Towers so the blog has been neglected so a quick posting rather late as we went to a talk by Stephen Twining about Twinings and their link with Twickenham. I did say I'd continue writing about our Florentine holiday but that time has nearly passed but I will talk about knitting, especially whilst we were there.

My fears about taking my knitting through security checks at Gatwick were completely unfounded, maybe the wooden magic loop needles and the metal crochet hook secreted in a ball of wool didn't show on the x-ray but I was able to knit on the plane both ways. By the time we returned I had made nine hexipuffs, I knitted whilst queuing to go into the Cathedral, whilst having coffees and in other odd moments. One of these opportunities was when Ian climbed Brunelleschi's Dome, (I knew I would never manage over 400 steps, sometimes climbing one floor of a building is enough) so I sat in the courtyard of the ticket office courtyard and worked on a hexipuff. Inevitably I was joined on the bench, a lady spoke to me, she and her husband were from Philadelphia, but she was keen to stress her father was from Florence, they were driving north to visit family whilst in Italy.

Once rested they moved on, I knitted and people watched, a tall  young guy came to sit down, then asked me if that wallet was mine. I hadn't noticed a wallet at the other end of the bench, so I told him it wasn't mine but I knew whose it was. I popped it into my linen knitting bag, went to the ticket desk and asked if they handled lost property, they didn't want to know, I went outside, checked the queues and crowds for the Cathedral and the Baptistry. No sign of the lady in the red top and her husband with the walking stick, also by this time I was concerned Ian would return and panic if I had gone missing from that bench.

He did return shortly, I told him what had happened, we opened the wallet using the bag as cover, there were credit cards, driver's licence giving a Philadelphia address, cash and best of all, a paper holder bearing the name of a hotel. Briefly, Ian and I had another look around for the couple before returning to our hotel so they could locate Hotel Ambassador. Fortunately it was near ours, but the couple, C and J were in a partner hotel also nearer so we walked there. As they hadn't  returned the desk clerk gave us paper and an envelope so we could write a note, identifying myself as the knitting lady, we couched it in terms of I believed I had something they had lost, enclosed my card and the card for our hotel, a map showing its location and left the envelope with reception.

We returned to our hotel, Ian went off to buy ice creams, as he returned the room phone rang, it was C, she was so relieved her husband's wallet had been found. He'd missed it whilst in the Baptistry, they'd returned to their hotel rather slower than us, received my note before they had had a chance to cancel the credit cards. C came to collect the wallet, sat on our comfy sofa, explained J wouldn't carry a man bag as it wasn't done in America for a guy to have a bag, especially one across the body. We tried to explain that it was common practice in Europe. (Subsequently I have noticed the local teenage boys going to school near here seem to do just this) C declared she would be taking care of J's wallet in future!

What have we learnt from this? One, carry the card of the hotel in which you are staying; two, continue the practice I learnt as a commuter, namely look behind you when you leave a train, bus, seat anywhere to check nothing missed; thirdly, be friendly and a bit nosy for if I hadn't asked C and J from where they came I wouldn't have been so sure it was his wallet; fourthly if you are a knitter take it with you and count your stitches one by one (and your blessings). I suppose I should add that good has come from the fact I cannot climb stairs otherwise I wouldn't have been in the right place at the right time and I wouldn't have a new friend on Facebook.

As there are no photos recording this I shall add the first picture of the Rowan wrap I have started, 2 ply wool on 5mm needles so a steep learning curve. Progress will be slow, with a 16 row pattern to follow. 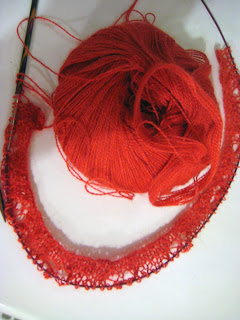 Posted by PixieMum at 23:19 8 comments: Links to this post

What we did on our hols.


Yes, it seems a long while already since we went to Florence, two weeks ago we arrived there, returned five days later. Whole trip was brilliant, everything was right.

Travel: we went from Gatwick South to Pisa, flying with Easyjet, from Pisa fast train to Florence about 50 miles, took about an hour through the countryside.
Some five minutes case pulling walk from station in Santa Maria Novella Piazza was our hotel, Rosso23 was amazing, we couldn't believe the size of our first floor room 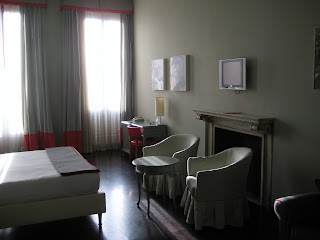 The length of the room was 21 paces from window to the far wall; had air conditioning, clean towels and bedding every day, fresh soap daily even if not needed, excellent shower, easy to understand lever fittings and plenty of hot water. 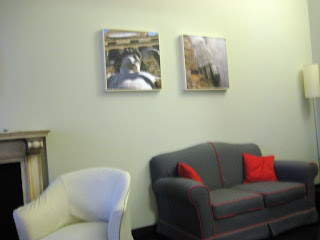 My only criticism, and it is a very minor one, the flat screen TV was mounted on the wall above the fireplace so it could be watched only from the bed rather than from the armchairs or the sofa. Not that it mattered, some days we didn't put it on, we didn't take our iPads or switch our phones on. We survived! and then the views from the balcony overlooking the square 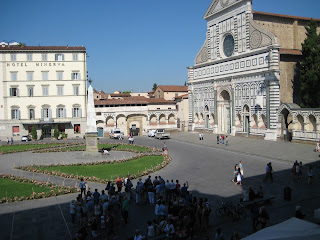 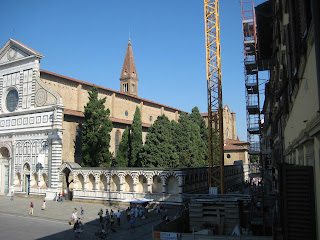 Had to have this photo, there was scaffolding - Ian said it was new scaffolding too - where another hotel in the same chain (Whythebesthotels) was being refurbished although we were never aware of any building noise. 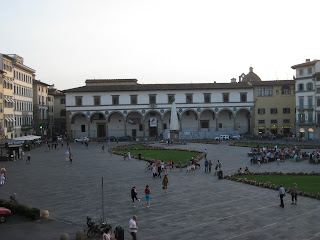 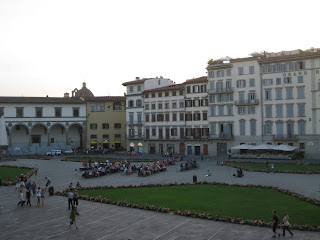 There was impromptu entertainment in the square, a singer with a mic and a guitar singing rather 60s/70s songs, none the worse for that. 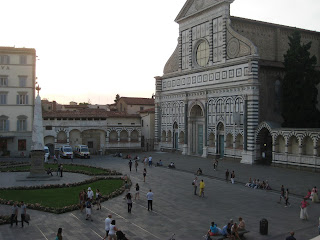 The church occupied a much larger area than was apparent from the balcony, to the right there was an enclosed garden, well some grass with bushes around, and then cloisters went as far as the red tiled two storey building in the distance.

Rather than attempt to describe the hotel here's the link ....
http://www.whythebesthotels.com/florence-hotel-rosso23/en/florence-hotel.html

Breakfasts offered a good choice, same menu each day, we'd been advised to have a good breakfast so found we needed little at lunchtime except say an Americano with a pastry or a small filled roll. Breakfast, for me, was fruit with plain yogurt, although there was yogurt flavoured with Nutella or coffee; then different hams, Brie and another continental cheese, rocket, cucumber and tomatoes. Then there were pastries, one called have cereals.  To drink, fruit juices and coffee with great variety of tea bags on the table, hot water available but we never had any tea whilst in Italy at all, Americanos gave us our caffeine fix.

Will write more about our adventures later ...with a few more pictures as didn't take that many.

Posted by PixieMum at 22:02 3 comments: Links to this post

The weather ... still sunshine, keep meaning to sit out in the garden more, am sure I will regret not soaking up the sun.

I am wearing ... East linen summer dress, sleeveless, much turquoise and marina blue design.
I am reading ...  for reading group the book is Notes from a Small Island, enjoying reading this again, hadn't realised how political it is in places and becoming a little dated, or rather historical. When this is completed will pick up Barbara Pym's Quartet in Autumn, also have a copy of Pride and Prejudice as have read only Northanger Abbey. That was a set text for O level, we analysed it out of existence, I remember a phrase about a curtain that seemed to move and fuss about a laundry list, so many years later I aim to catch up on Jane Austen.

I am creating ...   Hexipuffs, have made 247; also am sewing up cardigan called Gabrielle from Let's Knit magazine in 2010. I haven't used the recommended yarn, but instead that given as a Christmas present with a fiendishly difficult pattern so tinked it and found Gabrielle instead. Now just need to make the border. Chance to practice my picking up stitches skills.

I am listening ... to Ian talking to daughter who has just phoned home, sounds a cheerful call.

I am watching ... British Bake-off; Who do you think you are and last evening especially enjoyed the first programme of three - Robert Peston goes Shopping, enjoyable as I have lived through the changes in shopping although didn't shop in Chelsea Girl.
Also, can anyone tell me why on news and current affairs programmes when there is a male and female presenter, the man sits on the left and the woman sits on the right. I know it is round the other way in the studio but from the viewpoint of the viewer.

I am enjoying ... Pilates class, I moved myself from the beginners' class which have been attending for nearly 6 months to an intermediate class which is held at a more convenient time of 9.30am rather than midday, also the same teacher takes a class on Thursday evening, as her method of instruction makes sense to me I intend to attend that too.

From the learning rooms ... Ian's course doesn't start till next month.

On the menu .. Need to be a bit more organised about this, but we have cleared much of the freezer, chucked some rather dubious foodstuffs and now have little in there except soya beans and chicken pieces from last Saturday's Farmers Market. We are becoming old fashioned, shopping every few days buying fresh foods as we need them. It helps we have a greengrocer and an artisan baker recently set up shop in our HIgh Street. We generally make our own bread, but it is fun to try different breads and cake. The greengrocer has our support, we do find that one cannot buy large quantities, the fruit and veggies need to be eaten within a couple of days. Not quite Waitrose quality, but reasonable and nearby.

On the calendar ...nothing planned; keep meaning to go to Kew Gardens, to take a boat trip on the Thames. Met up with former housemate on the South Bank last Friday, I was amazed how the whole area has changed, I felt like a tourist in my own city again, so much that it had more impact than the Press Photographers exhibition we had come to see. More visits to this part of London needed methinks.

Thanks to The Bookworm for I have used her template for my blog.

Posted by PixieMum at 18:57 5 comments: Links to this post