There was something that happened on our Lake District holiday I didn't mention in my last blog, it would be appreciated if any readers of this would comment.

As a thank you for their hospitality we took our friends out for to dine at an hotel near Windermere, booked and chosen by them for its reputation and views, we arrived early, had pre-dinner drinks until our table was ready in the large, but mostly empty room, I think there were four tables occupied in the formal dining room.

Nothing but praise for the food and drink we had ordered whilst having pre-dinner drinks, our problem was at the end of the meal there was shouting and noise from a nearby table which was quite close considering there were so many empty tables, we noticed an iPad or tablet switched on and presumably the grandmother shouting at her grandchildren on line, these children it appeared were about to go to bed and grandmother and the three other diners joined in too. This went on for some time, it was impossible to hold a conversation at our table, the staff who were clearing a table completely ignored the racket, eventually one of our party politely asked the noisy diners if they could be a little quieter, this was met with abuse and cries of spoil sport. Noisy grandmother then told her grandchildren, and presumably their parent that some horrid people had complained so she couldn't continue, to our surprise someone from another table sympathised with noisy table and the whole party moved to the empty sofas in the bar area well away from us.

We decided to forgo coffee, went out on to the terrace to see the views over Windermere before returning home. I wrote a review about this, the response was that as the hotel had wifi it was to be expected it would be used, noisy grandmother had agreed she would be contacting her grandchildren in this way, there was an implication that we had spoilt some celebration. So why weren't we informed when booking, when having drinks or when allocated our table by the staff, or even an apology in advance from noisy grandmother.

I'm trying not to be fuddyduddy, it was the level of noise, the shouting and lack of manners as much as the use of a tablet during dinner in the restaurant, if they were residents why not take advantage of he privacy offered there.

'This seems my year for travelling north, not Yorkshire this time but nearby Cumbria to stay with friends, Val & Geoff in the tiny village, well hamlet of Elterwater, almost in the centre of the Lake District at the end of July. Ian and I spread the 330 mile journey over two days, we are out of practice on long journeys, we decided it would be interesting to see something of the country rather than motorways, our overnight stop was Stafford, we had booked in online, so had time to visit the National Arboretum. Very  surprised it was free entry, we didn't have too long there, but had a much needed tea and a bun before a quick look around, helpful volunteers had advised us how far we could go in the time available, stumbled upon this, 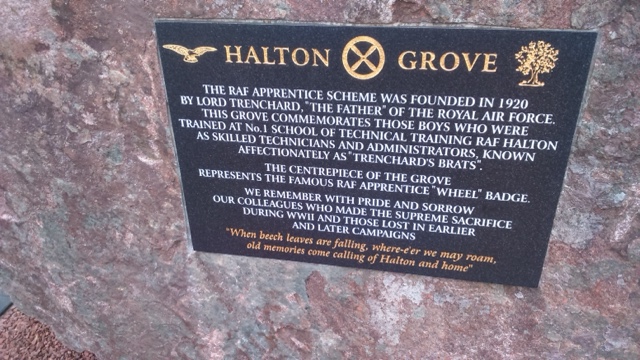 Interesting for me as my eldest cousin, Roy went to Halton as an apprentice, one never knows when family history connections appear. There was a calmness about the arboretum, we would like to return to appreciate the peacefulness and atmosphere.
Apart from our first day when rain fell steadily the whole day, we stayed in thereby missing the Ambleside Games, but with a view like this 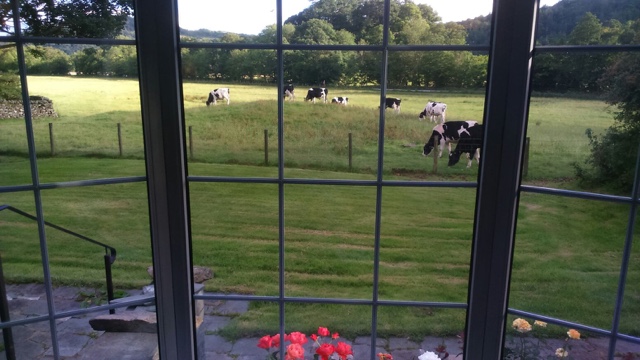 from the house and finishing knitting these socks who minds? 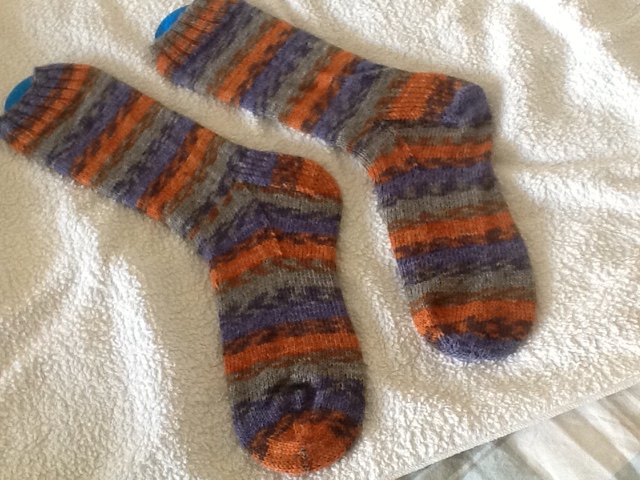 Rather than a long tirade listing events I will mention an unbelievable coincidence. Whilst away we went to Blackwell, an arts and crafts house near Windermere with amazing views over the lake, http://www.blackwell.org.uk/event/27.     this web address gives details far better than I can. Outside there were statues by Laura Ford, of which three were meant to be a child in distress but there were only two on display. Yesterday, Thursday 11th, Ian and I went to the Summer Exhibition at the Royal Academy, near the end this was spotted, the missing statue. 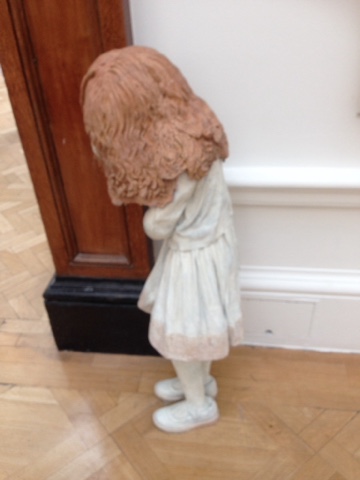 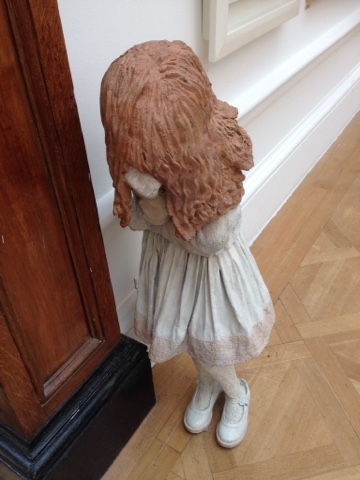 On another day in the Lake District we went to the Cumbria Steam Fair, amongst all the steam, craft and food stands there were plenty of stalls selling all sorts, I rooted around the Haynes manual for my 20 year old Corsa, but none were available, however another treasure was found amongst sprockets, nuts, bolts, 4 Barbara Pym books, not original publisher but in better condition than mine, on putting the new ones away and counting up I have all her works now. Looking forward to reading them, along with book club book and knitting and crochet books
Our friends in Elterwater have a holiday flat, just for a couple, well equipped, lots of lovely extras like a full fruit bowl, free internet, off road parking, so if any of my readers are interested here is the website:-
http://www.visitclockhouse.co.uk/index.html.   There are no agents, do ring the owners up, they love to chat with prospective holiday makers.
Given the vagaries of Blogger this blog will show the date I started these ramblings, so I will close with saying the blog was posted Friday 12th August, 6.12 pm. Enjoy, I hope not to leave it so long next time.
Posted by PixieMum at 21:54 No comments: Links to this post