The big surprise was that England won their match against Samoa, especially so as Ian and I were there to watch it. What we call The Rugby Ground in popular local parlance and is officially the Twickenham Stadium is less than 30 minutes walk from Pixie Towers.  Good cardiovascular walk too, we are not dawdlers, the exercise was good for me, even more exercise walking up and round the concrete grey spiral that replaces stairs on the new south stand. 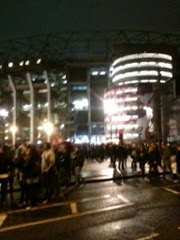 The spiral can be seen in the lower circle of lights in this picture, taken on my phone as we were walking away from the stadium. The photographs from my phone have mysteriously appeared as "photo stream" on my iPad, not sure why they are so small here though.
The atmosphere was very jolly at the match, even in such huge crowds, with over 82,000 people we felt quite comfortable, even in the rather small seats where my knees were rather pushed against the seat in front, no one complained. the respect shown when everyone stood for both teams' national anthems, the humour in frequent Mexican waves and singing of Swing low, sweet chariot - just the first two lines of the first verse - and oohs and aarghs to action on the pitch. 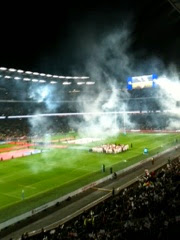 Fireworks and action before the start, 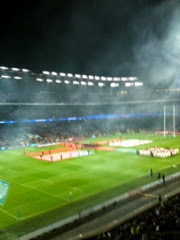 Then some action, I think we need to read Rugby for dummies to understand the action properly but it was entertaining. Write up in the paper today is a little more critical of England, there was plenty of play in the middle of the pitch and no one appeared to run full pelt down the side from one end to the other, but we enjoyed everything about our evening out. Even the weather favoured us, we had wrapped u p warmly,  it wasn't chilly and the rain stayed away whilst we walked there and back. 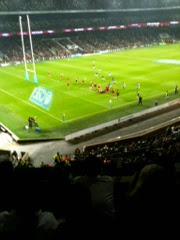 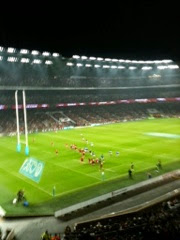 There was a form of ticker tape running around the top of the stadium, which did explain a little what was happening, especially when players went off and substitutes came on. Why substitutes when no one was injured? Also there are large screens so if the action was a long way off one could watch the action in close up.  I did notice the red of the England kit looked more scarlet on the screen than on the pitch, part of seeing colours differently especially on a screen or when the background is different.
It was different for us, it made us happy, we had exercise, fresh air and it has provided something about which to write for this blog that isn't knitting or serious. I did regret not taking knitting or crochet, weather was mild enough to have worked on a project between the two halves.
Found this in my 'drafts' box, not sure why it wasn't published in early December, instead am publishing now.
Posted by PixieMum at 22:20 1 comment: Links to this post

Locally during November we have a literature festival, so far I have been to two talks, Ian went to one alone as I wasn't feeling up to it, tired and sinusy so coughing which wouldn't have been good for the audience to hear.  First talk was by Emma Bridgewater, well it was more a question and answer session, none the worse for that for she was so enthusiastic in her encouragement of British industry, of design and doing something that was against the trend by manufacturing in this country. What other products could gain from her insight?
Emma stressed the importance of craft, patchwork is for relaxation in the evenings, so she can be with her children whilst watching TV, or rather as she says listen and sew. We learnt her degree was in English literature, medieval I think, the ceramics appeared at first to be something into which she drifted whilst living in a house share in South London.  Certainly I would like to visit the factory, maybe try my hand then at decorating a bowl. DS and DiL have done this and praise the experience highly.
A complete contrast was the talk about Ancient Greeks by Peter Jones, I believe he was on TV and has written about the Romans too.  Just hearing about the Greeks, the alphabet, language and just interesting snippets about the expansion being limited to places accessible by sea rather overland travel, about how women didn't count in their democracy, about their architectural designs still in use today left me wanting to learn more. There never seems enough time for craft, reading, domestic stuff, volunteering and socialising.
Now we are booking another talk, keeps to my mantra of continuing to learn.
Another good piece of news, today I made our Christmas cake, using a recipe from the Stork Cookery book that we were given in the sixth form at school, the same recipe I have used over the years, for my wedding cake and for Christmas. Only difference from the recipe is that I used unsalted butter rather than margarine, a product we never buy nowadays. Cake took over 4 hours to bak at Gas mark 1. 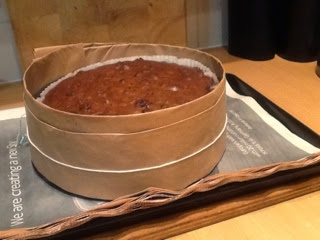 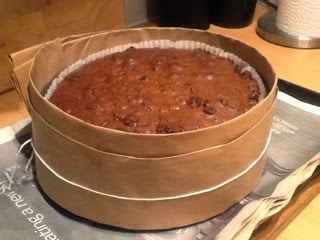 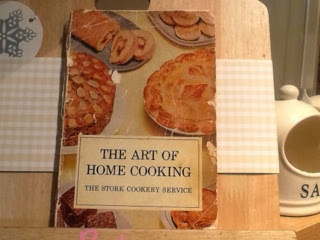 Oodles of happiness here today as after 3 years and 3 months I completed the Beekeeper's Quilt. It started as a project to use up ends of sock yarn, at the time I had made just three pairs, most of the other 4ply yarn has come from other sources.

The picture was taken by Ian standing on a chair, the quilt is on our hall floor, I will attempts have more photos of it in place,  am so delighted that it has turned out well.
I have sewn it up using mattress stitch so the puffs butt up against each other, rather than following the instructions to tie them together at the corners. It has made for a less floppy, more solid quilt that is lovely and warm. 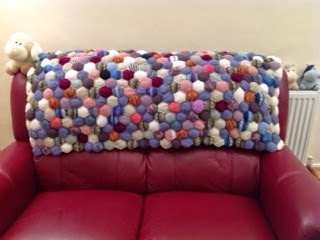 I would like this to become a family heirloom, passed down the generations, like my mother's christening robe, first used in 1916, and made from a boderie anglais dress worn by my grandmother's bridesmaid when my maternal grandparents married in May 1914.
Posted by PixieMum at 20:28 4 comments: Links to this post

It has been noticed that in various online places that folks are posting five good things in their lives, sometimes it is five good things for five days. Rather than commit myself to such discipline this procrastinator will post good things here with no regard for number or frequency.
Firstly, our garden, Ian has worked so hard in his green gym to make this look beautiful, last week he surprised the shop keeper by buying a whole tray of cyclamen to plant amongst the trees. 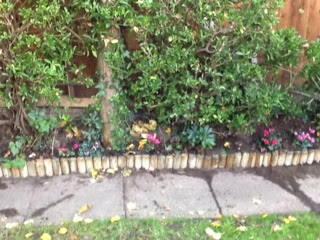 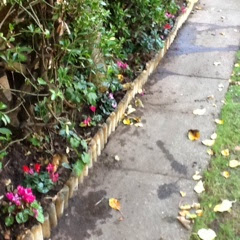 Both pictures were taken with my iPad, not sure why they are different shape but I am still learning, not sure how to blow them up for those reading this on computers rather than tablets.
Another delight in the garden is the bird feeders, if we eat breakfast in the kitchen rather than the dining room we are entertained by birds at the feeders, far better than Breakfast TV, especially when one is watching three parakeets trying to balance and feed. I am cruel enough to chase away the large number of pigeons who do the same acrobatics.
A bit mundane, another delight for me is the home comfort afforded by domestic machinery and controls. This chilly morning I was just able to tap the plus symbol on the heating controls to ensure a warm house; a few minutes ago the washing machine pinged to tell me the laundry run was finished so I could put it in the dryer. When I compare this with the twin tub, the Redfire (?) with the coal scuttle filled from the coal bunker using a rusty cold shovel and washing freezing out on the washing line I am so appreciative.
Finally, a good thing I have succeeded in making coasters to under under plant holders. I had quite a lot of bright coloured Rowan Big Wool to use up so made these five coasters for the orchids on the window cill. Must say that we have net curtains purely for security, I don't like them but blinds or shutters would look so wrong in a 1930s bay window with traditional furniture of that era. 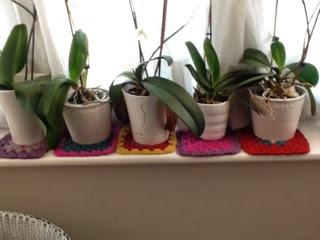 the coaster below matches the plant holder that came from my parent's home. It was on their dining room hearth too, but matches our blue tiles so well. Having a few items from our family homes is another small source of pleasure, for example two of our chiming clocks belonged to our respective grandparents. The main challenge is to have all three chiming clocks synchronised, another source of happiness. 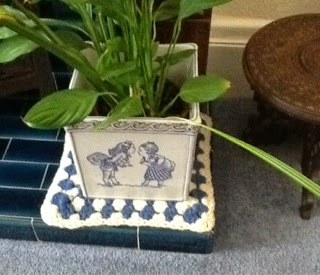 Below is my attempt at an aerial shot of the Granny Square without the pot on top. 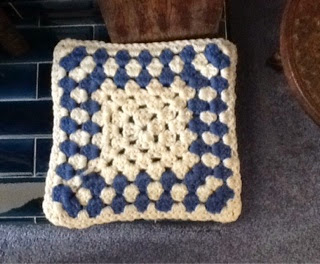