The throw is made, very difficult to photograph, Ian used picture hooks and this was the result:- 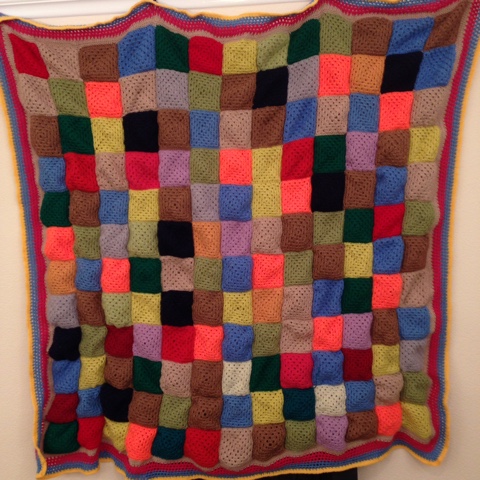 Very warm and snuggly, pleased with the final result and yesterday for a few minutes this young man was lying on it, but he would rather be cuddled or sleep in some one's arms like this:- 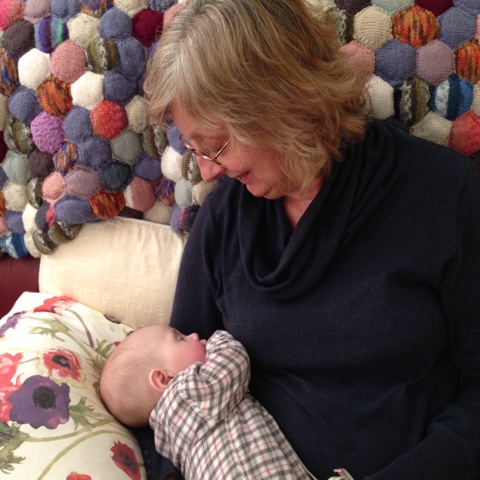 Notice behind me is the Beekeepers Quilt over the back of the sofa. 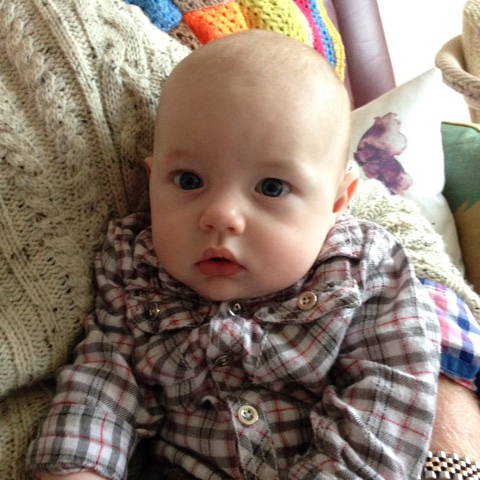 Edward and his parents stayed  Saturday night, gave his parents to catch up on sleep whilst we amused Edward.
Meanwhile, I am battling with Ian's socks, not sure how many times I have carefully unpicked the work, stitch by stitch, now going to attempt the heels with an eye on Uni Challenge. 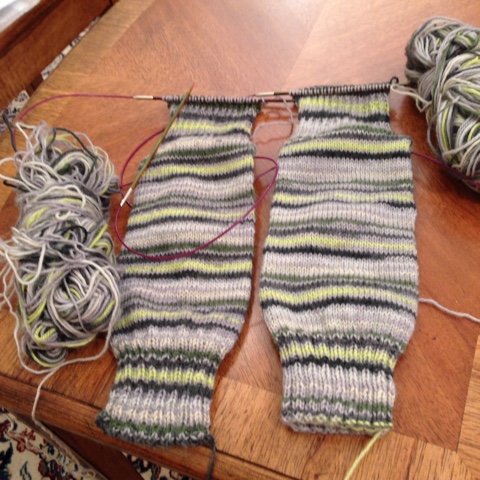 Posted by PixieMum at 18:48 2 comments: Links to this post

Just a brief blog to show what I have been doing lately. 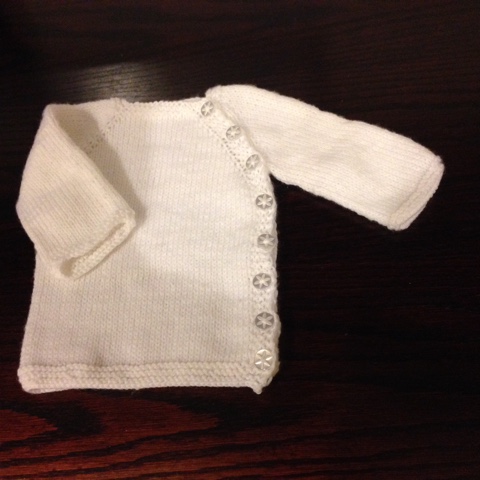 A Puerperium Cardigan for Rachel, along with a couple of hats, all three garments definitely for newborns, 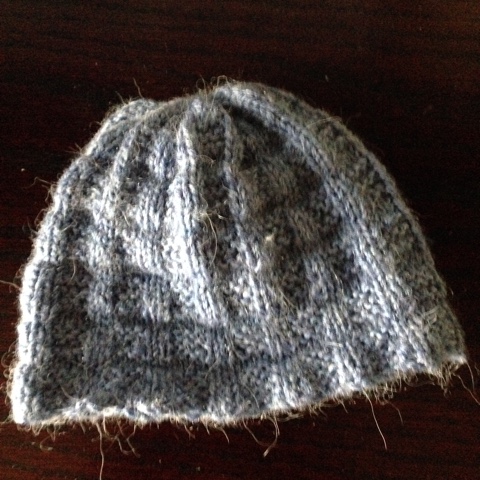 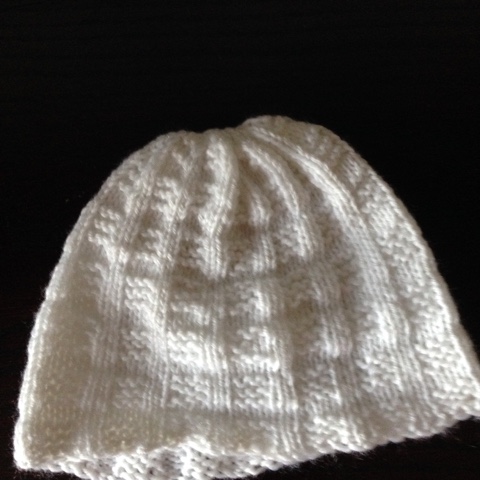 We don't know whether these are for a great niece or nephew, blue for outerwear would suit either.
A work in progress for Rachel too is a BSJ (Baby Surprise Jacket), I am attempting not too knit too tightly these days but still went up a needle size to obtain the right tension. 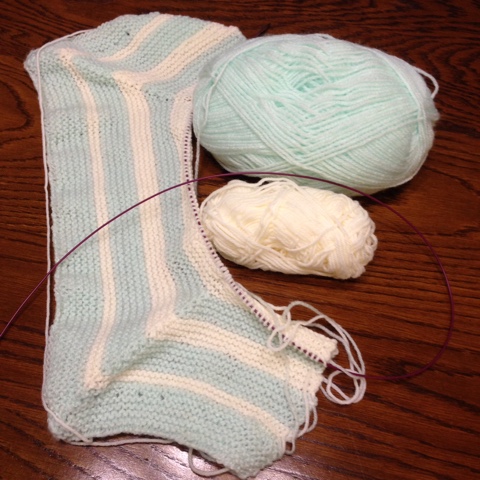 For a long while crochet squares have been my portable project, all 156 have been crocheted together, borders have been created, one beige and one pink, just a final border in blue for definition to be hooked. 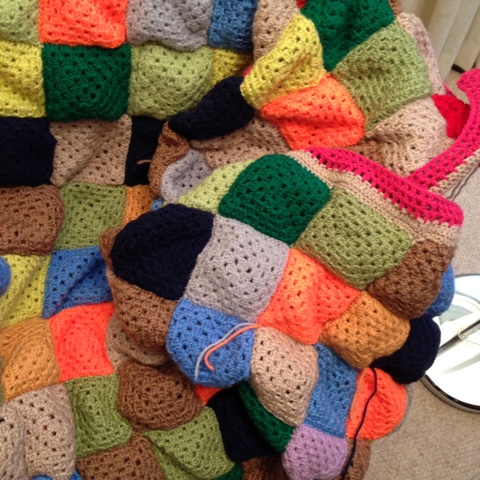 The photo shows I have some ends to weave in. This throw started as a project to use up odds and ends of double knitting, from it I have learnt that double knitting covers a wide variety of thickness of yarn so shall we say that not all the crochet squares ended up the same size. However, it is warm, snuggly and I have the perfect home for it, although it is not going to be just for display but for use, warmth and enjoyment.
Posted by PixieMum at 15:53 1 comment: Links to this post

Happiness is going to and from London where all the transport systems worked well on Friday, Ian drove me to the nearest Piccadilly line station, I was offered a seat immediately, pulled out knitting to find fixed circular needle had come away from cable, whilst scrabbling around for needle neighbouring passenger spoke to me so we chatted. With her perfect English didn't connect she was German, she had taken A levels in London and was on her way to a class reunion, we spoke about the benefits received by the volunteers working in her museum shop, not tangible benefits, but increase in confidence, skills, companionship, friendship, these retired ladies (it was mostly ladies, many widowed) who play golf, holiday, meet together and would never have done so if it weren't for volunteering. One lady, in her mid-70s had walked tall and gained so much from mastering a complicated computerised till system. As a volunteer myself I can endorse so much of what she said, I told her of my delight at no worries about leave rotas or when one went to lunch, indeed which day one works.
The transport fairy was at play on my way home, walked downstairs at Embankment station, a train for Richmond came in, I boarded and was offered a seat straight away so was able to read the Evenig Standard. After all cannot go to London on a weekday and not come back with the evening paper.
Reason I was going to town was to meet with former house mate, another mid-70s lady who has just returned from touring China, we looked around the National Gallery in the rooms covering late C19th and early C20th works, I was taken with this:- 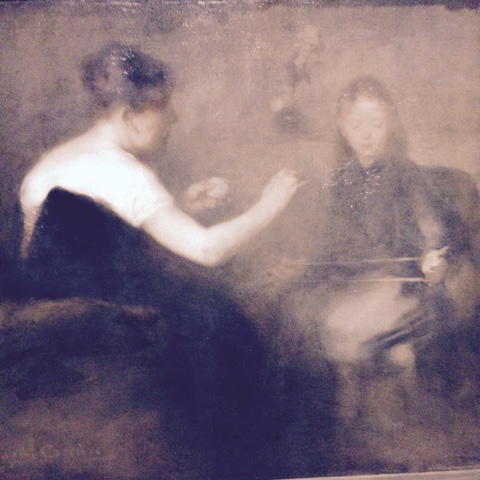 Not clear, but winding a skein of wool, here's the details - 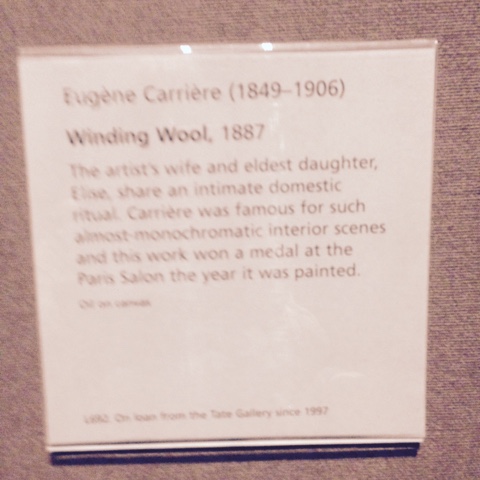 Today was such a happy day. I was at church and down to read lesson, just Jonah, no New Testament as the service was shortened to allow for Act of Remembrance afterwards. All went well with the reading, well I had practised beforehand, back to pew,  a latecomer came to sit next to me, I looked at her and realised it was my lovely daughter Martha.

This may not unusual to anyone who doesn’t know me, but Martha lives 100 miles away in Dorset, we hadn’t seen her since the first weekend in September, she isn’t religious any more, so to join me for a service was considerate.  She had tried to be there before the service but M3 & traffic didn't help. Plans had been made for her to come here for 21st November and for the first weekend in December for “Mummy and Martha” time so her visit was a surprise to me, not to her Dad! I had intended to stay for the Remembrance service, Martha was willing to do so, instead we went home so she had time with her Dad too. Unwittingly I had left a big casserole slowly cooking, thinking it would be good for a few meals for us for a few days, we were able to give her a good lunch.

We went to Kingston in her new car,  a Joules Christmas jumper may have been purchased by me, and  Knit-pro circulars to replace the broken one. John Lewis did say they were having supply problems with Knit-pro, I wanted fixed size 4.5mm had to settle for just the tips, that's ok I have plenty of cables.

One very happy Mum, pleased when  Martha phoned to say she was home safely, she had had to contend with rain and heavy traffic on her way home.

Posted by PixieMum at 19:21 2 comments: Links to this post