A very long time ago when I was growing up my Mother regularly baked a cake on a Saturday evening, as my sister and  I grew up we would make cakes too, I’ve never stopped making home made cakes although the procedure hasn’t often been on  Saturday nights more when I’ve felt like it, we don’t live by regular routines any more! No need.

As I was making a sponge - vanilla Victoria sandwich if you are curious, Ian chose it over chocolate - that regular routine was brought to mind, how I appreciate changes in those years that make he task easier, prepared cake tin liners, electronic scales, silicone scrapers, handheld mixers, we did have these at home in later years in the form of a Kenwood chefette. I’m using Mason mixing bowls, imperial measurement and  licking the bowl still, yes I know it is raw egg but such a minute quantity. 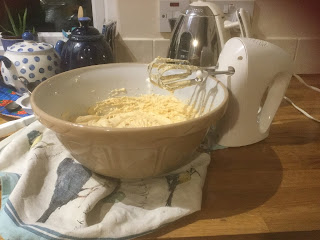 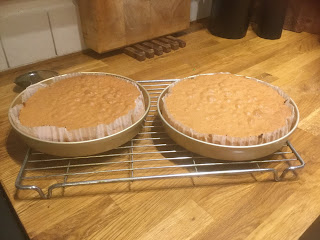 Once cooled will be sandwiched together with homemade blackcurrant jam, not made by us but bought to support a charity, not sure which one. 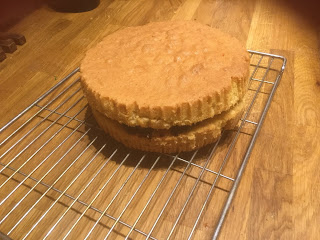 Jammed together eventually, half watched programme about Australian railways whilst working on sudoku from today’s paper, seem to have most success with those from Metro, so far have completed ‘gentle’ and working on ‘moderate’. Often if I’m struggling the best answer is to leave it till the next day and the correct answer will appear.

In spite of the grey, wet, cloudy weather it has been a good day, our daughter’s birthday, couldn’t spend it with her but FaceTime helps to bridge the miles, England winning the rugby semifinal against New Zealand, we watched most of the match at home, listened to the last few minutes on the radio in the car. The roads to Kingston were delightfully empty, I didn’t wish to be late for Knitting 🧶 & Crochet Guild meeting in John Lewis. That store is demonstrating the financial struggles the partners are having, lifts and escalator not working, loos closed, doubts whether we will be able to continue to meet in the Community Room, an air of shabbiness, fewer tills so longer queues. It wasn’t all bad, I spotted a John Lewis brand coat 🧥 in fabric and style I liked, after the meeting it was tried on, approved and purchased. Now my old coats can be donated to WrapUpLondon to keep someone else warm.